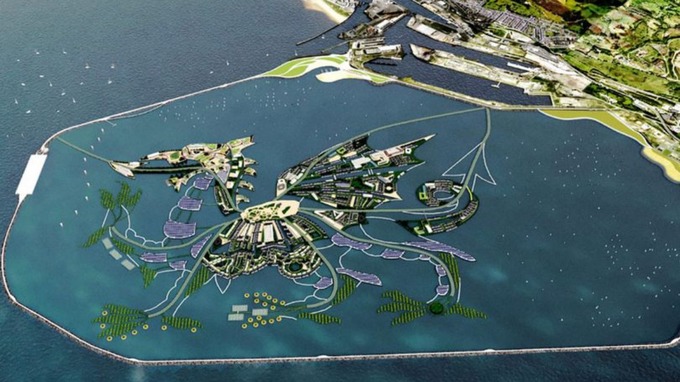 Two rivers drain into Swansea Bay, the Tawe and the Nedd, and for several years there have been dreams to build a tidal lagoon between them  on Dylan Thomas’ ‘long and splendid curving shore.’

The original plan envisaged a huge nine kilometre wall build with sand-filled, synthetic bags, faced with stone and a series of turbines to generate power embedded into it.  Oyster beds and yacht clubs were planned within its span and it would have served as a prototype that could be replicated on many sites around the British coast.

That lagoon would have had a giant Red Dragon sculpture facing out to sea symbolising its Welsh identity but the UK government ruled the unit price of the power it would generate was too high and the scheme was axed in 2018.  But Swansea Council didn't give up the fight setting up a Tidal Lagoon task force to keep the flame alive. So at Bohemianmojo we were delighted to hear about the revival of the dream as a new consortium gathered in by the council has taken up the cause and come up with a magical solution to the costing problem.

And with the wave of an architect’s pen they’ve taken the emblematic Welsh Dragon off the prow of the lagoon and laid it out in the form of a housing estate floating on the impounded tide. That light bulb moment came from big project engineer Malcolm Copson and it envisages a 10,000 new homes rising and falling on the tides off the City of Swansea.

They’re calling it the Dragon Energy Island and the building technique and the dimensions of the lagoon will be roughly the same as the original plan with the addition of higher walls on the seaward side of the structure to act as a weather shield for the innovative housing estate.

Critically though this Value Added vision encompassing the income from housing will mitigate the construction costs of the lagoon by around 30% immediately bringing down the unit cost of the power the lagoon will generate to commercially acceptable levels.

Work could start as early as 2021 making the Dragon Energy Island operational by 2026 with a working life of 120 years at a cost of £1. 3bn. That is tremendous value when compared to the massed arrays of wind turbines blighted by inconsistency and with a shelf life of just twenty years or so.

The practicalities of floating homes have already been tackled in the Netherlands where half the population lives below sea level.  They’ve developed innovative ways of tackling the issues of tap water supplies and sewage links to such houses and the model for Dragon Island is likely to be the district of Ijburg in Holland where a hundred homes have been built on buoyant concrete platforms. At Swansea they could be constructed on the landward shore of the lagoon then towed into place by tugboats.

The plan has been buoyed up by an independent report endorsing the costing of the project pointing out it would create thousands of jobs in the region too. AT Bohemianmojo we believe it also provide an innovative solution to increasing housing stock on the already crowded UK mainland where building land is at a premium.

There are some other interesting proposals attached to the scheme including provision for gigantic underwater date centres within the lagoon neatly solving the high energy requirements of large servers not least for cooling them. What also excites us is the plan to use some of the power to crack water into hydrogen and oxygen.  Oxygen is in high demand by industry but hydrogen is being advocated as zero emissions power for ‘hydrogen economies’ like the one on the Orkney Islands we featured recently.

However we’re not so keen on the solar panel farms proposed for the lagoon wall. They’re just another way of storing up pollution as far as we’re concerned.

Another interesting proposal is an arrangement, which would see Swansea council and other public sector bodies buying their electricity directly from the Dragon Energy Island. It’s heartening then to see the Leader of Swansea Council, Rob Stewart, throwing a considerable amount of his own energy into making the project a reality after the disappointment of the UK government axing the original scheme in June last year.

Councillor Stewart has set up a task force to drive the project forward and he has this to say about the Dragon Energy Island, “Despite the UK Government not backing the previous proposals, we never gave up hope on the opportunity to deliver a major renewables project in Swansea Bay.

“An enormous amount of hard work has taken place behind the scenes to develop a new proposal that will generate clean, green power for many generations to come.

“The new proposal is a larger and more ambitious renewable energy development that's built upon the natural tidal benefits of Swansea Bay and complimentary technology to generate zero-carbon power. 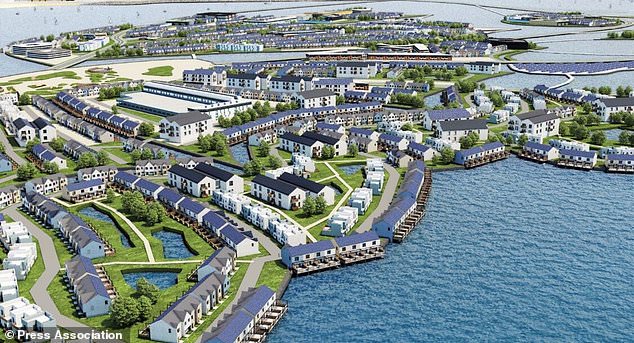 “The tidal lagoon is at the heart of the new proposal and gives us the opportunity to create a new floating community of homes and businesses within the sea wall. This has already been successful in countries like Holland, Germany and Denmark, providing a sustainable solution to issues including population density and climate change.

“Importantly, the independent report has found this new proposal to be credible and financially viable with the potential to make savings of up to 30 percent on previous estimates.

“There's considerable interest from major companies in turning this opportunity into a commercial reality, so we're now keen to move forward.”

Hats off to Councillor Stewart! There’s no doubt in our minds that the way forward in terms of green zero emissions energy production for the UK is tidal power with the metronomic regularity of the tides and the high kinetic energy of water on the move with the long lifespan of a tidal lagoon making it a highly attractive option.

There are many sites around the UK coast suitable for this model of a tidal lagoon, several of them upstream of Swansea in the Bristol Channel.  This Value Added scheme incorporating housing on Dragon Island within the lagoon could be the answer to the high capital costs of these projects. We love this idea and the sooner the UK government gives it the green light the better.

This video produced by the original lagoon proponents explains the essentials of the build, which will be more or less replicated.