Over the centuries many people had seen the apparition, standing on the Ancient British burial mound, near a little Welsh town and all gave witness to one striking feature that made the ghost dazzlingly distinct from any other. It was, they said, cloaked in a Golden Corselet: in the Welsh language, a ‘celain aur.’

This place, on the outskirts of the town of Mold, was known to the locals as Bryn yr Ellyllon or the Hill of the Goblins, although in some translations ‘ellyllon’ means wraith or spirit. Whatever the translation that place was known by countless generations of local people to be haunted by a ghost wearing a Cape of Gold.  They saw it standing on the tumulus or, sometimes, walking down the hill towards the River Alun that runs around the base of the town. Some perceived it to be a boy, most a girl or young woman, but all said the gold ‘shone like the sun’ even on the darkest of nights.

The legend of the ghost came down through the Iron Age and the Dark Ages into the days of written history so that priests and dignitaries noted the accounts brought to them by humble townsfolk. One such account came in 1819 from a woman called Nancy who’d was herding her cows down the lane in moonlight when she saw the Golden Ghost cross the track in front of her as it walked down the Goblin’s Hill a quarter of a mile outside the town boundary. Nancy gave her account to the local landowner, one Mr. Langford, who mentioned it to the local vicar the Reverend Gough, who in return noted it to the Diocese. It was the same Mr. Langford who many years later, in the autumn of 1833, ordered the burial mound to be levelled and a team of workmen and carters were brought in to demolish it. They used the gravel and boulders from it to fill in holes in the road. The workmen had removed most of the mound and carted it off when they came across a cist, a stone coffin, at its base. Inside the cist they were greeted with a most fantastic sight a skeleton encased in the crushed remains of a glistening golden corselet!  And so the link between prehistory, the landscape and the haunting legend were inextricably revealed.

A year ago Stephanie and I found ourselves standing at the scene of this most extraordinary ghost story. In keeping with the destructive tradition of the Victorian landowner an ugly, three bedroomed house stands on the spot where the labourers found the astonishing Golden Cape of Mold. These men were the poorest of the poor, thrown onto the tender mercies of the Parish by the Poor Laws (shades of Oliver Twist) so no surprise their first response was to cut the gold into pieces and share it out. Unluckily for them, but not for us, the local Vicar tracked down most of the pieces and three years later the bulk of the Golden Cape was sold to the British Museum by the landowner although six, small segments were never recovered. 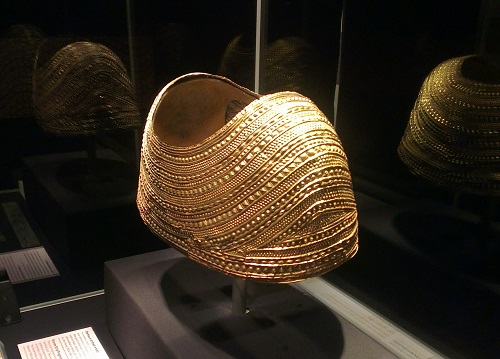 It was at the British Museum that Stephanie and I had first viewed the Golden Cape some three months earlier and the visit to the place of its discovery was really something of a pilgrimage. You see the Golden Cape truly is a wondrous object. Made from a single piece of gold, about the size of a ping pong ball, it’s decorated with the most beautiful sequences of repousse work where the ancient goldsmith had impressed the paper thin gold from behind to leave raised embellishments on the front of the object.

This wonderful artefact is nearly four millennia old yet many doubt the most skilled modern goldsmith, not even a Cartier or a Faberge, could match the simple beauty of its adornment. No wonder the Cape was included in a list   highlighting one hundred of the British Museum’s own exhibits that had ‘Changed the World’ for a BBC radio series.

It now takes pride of place in the Bronze Age gallery of the British Museum and we found it absolutely mesmerizing. The Museum displays the Cape in a square, glass case and as I looked at it in wonder I noticed the back of the Cape was reflected in the highly polished glass opposite me.  “Stephanie, could you just go round to the other side,” I asked. She did and after a couple more directions I was able to take this photograph of Stephanie ‘wearing’ the Golden Cape. It’s an image I treasure.

And that’s how we came to be standing on the pavement of the Chester Road, leading into Mold, looking at the house called Brynfa. How did we feel about that place? Mixed thoughts really. We were certainly dismayed by the sheer lack of recognition of what had been found here. Yes, there’s a small, factually incorrect, Victorian plaque in the wall of the house however we think such a site should have been specially recognized by a lack of any development at all. We see it as a missed opportunity to put Mold on the world stage. The field behind could have been taken into public ownership long ago so that locals and visitors alike might walk the ground and ponder how such an object had come to be there. Who had worn it and why had they worn such a stunning piece?  When we visited the fine but underfunded local museum the curators and librarians agreed and told us the local town were mostly lukewarm or completely ignorant of the Cape’s existence and link to the town. What a shame but it is what it is and we can only hope the house is a happy one for those who have lived there? 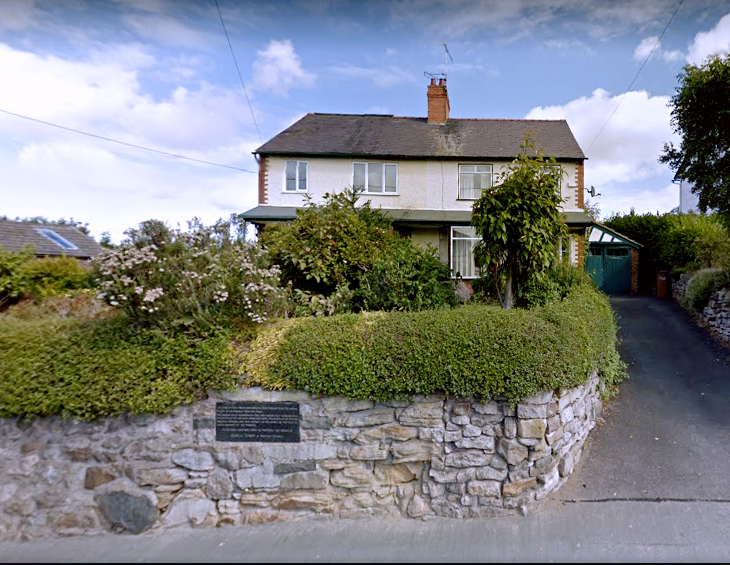 For our part we can only imagine the Cape was created as a symbol of power or religion or both if, in the Bronze Age, earthly and spiritual power were intertwined. Why Mold? Well, the settlement has always been a regional center in a landscape where the mountains of Wales meet the start of the plains of Cheshire. Today it has a senior criminal Court and council offices and it’s certain the site of Mold must have been an even more important center of power during the Bronze Age. We think the answer lies in it’s position, roughly at the ‘elbow’ of a route linking two highly important centers of Bronze Age industry and culture – the Great Orme, twenty three miles to the north west and Alderley Edge, forty six miles in the other direction. These are the sites of two of the most extensive and important Bronze Age copper mines known to archaeology in Europe. Considering the miners used deer antlers as picks they are truly vast in scale and copper is, of course, the main constituent of Bronze when blended with tin.

Not fanciful then to believe that Mold, with its cluster of major burial mounds, might have been the capital of the king or chieftain who ruled over copper production in Britain. He would have been a powerful and a wealthy man; wealthy enough to commission a stunning treasure like the Golden Cape.

As to who wore it we may never know but it’s great to speculate. Whoever wore the Cape (it was mounted on a frame of copper strips and a leather underlay) was small in stature and experts believe it would only have fitted a woman or, perhaps, a teenager of those times.  If we accept the view it was most likely to have been worn by a woman or a girl then maybe it was the chieftain’s daughter who wore it for great ceremonial occasions. Why not a great priestess or seer, a famous woman of her time who might have been a sought after oracle, prestigious enough to wear this sensational bling and was then buried wearing it.

The destruction wrought on the cist means we’ve lost the skeleton interred there forever. With today’s science we would have learnt whether they were indeed the bones of a woman, where she came from and even what her diet had been. If any DNA could have been retrieved we might have learnt a lot more as another article later in this series will sensationally tell us.

In the absence of hard evidence we are left only with the luxury of speculation but what of the strange link between the visions of a golden ghost and the truth found in the grave? Well, I’ve heard one very level headed, no nonsense, senior archaeologist suggest the ghostly sightings were not figments of the imagination but fragments of the imagination passed down through the genes by the mysterious memes of race memory.

At Bohemianmojo we like that explanation very much but there’s a postscript to this story. Since the light of day first shone on the astonishing Golden Cape of Mold, after millennia buried in a stone coffin, the Golden Ghost has never been seen again. Has the memory been lost and forgotten in the community? Only time will tell.