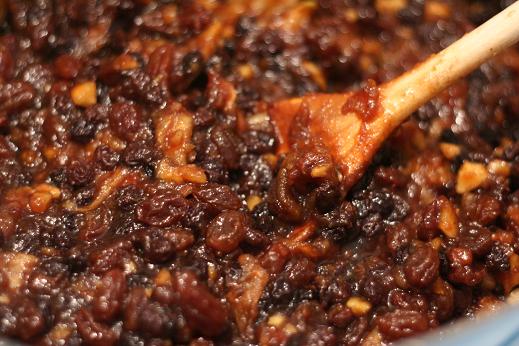 Tangy and sweet, with a mouthfeel that is an adventure in every bite, traditional mincemeat is a delight to the palate. 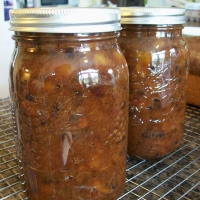 Historically, mincemeat has included actual meat, either beef or game (mostly venison) however these days it tends to include simply the suet rather than chunks of meat. Historical versions have included meat, suet, dried fruit, cinnamon, nutmeg, and cloves along with a healthy dose of spirits, either brandy or rum. Although, historians disagree on the exact origination of mincemeat or how it came to be such a holiday staple, I believe, based on the combination of strong spices and spirits that it came into being as a way to serve meat that might have been less than fresh. I’m guessing it was what came to the table from the food cellar in the dark of winter as stores were needing to be stretched and still enjoyed. Spiced meat is not uncommon throughout a variety of cultures, the spices not only mask the taste if it is closed to spoiling but also kill bacteria that might lead to food poisoning. Remember the meat that was carried over the Swiss Alps in wine amphoras? The spirits were a preservative, making it possible to carry the meat long distances without spoilage.

Today’s mincemeat is made from dried fruit, suet, spirits (brandy or run) and cinnamon, cloves and nutmeg. According to the History channel, mincemeat became a holiday treat because of the “trinity of spices”. Another interesting tidbit of information from the History of mincemeat pies? Apparently, they were the “twinkie defense” of the 1800’s. Due to the combination of fruit, protein, and sugar mincemeat was considered a digestive nightmare, potentially contributing to any number of violent deeds that people committed due to indigestion and brain disruption. 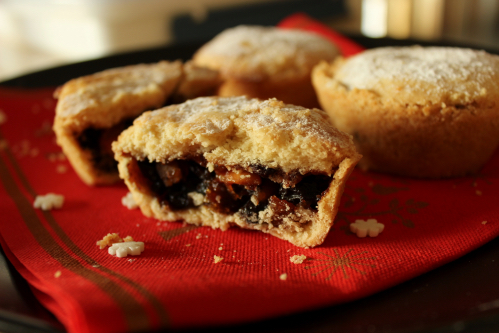 From a culinary perspective, if you are going to make mincemeat yourself, you actually need to start at least two weeks earlier than your meal time. It might be easier to find a quality mincemeat option and use that if you have gone past the two week period. Once you procure your mincemeat, it can be used to fill pies, which is the traditional method or it can be baked into cookies, muffins, and breads. With a little googling you will find any number of interesting recipes, from tarts and cinnamon rolls to a really delicious looking African casserole.

From a health perspective, the virtues of mincemeat are pretty variable. Traditional recipes are much healthier from a basic real food perspective; real meat, real suet, spices and even the spirits in small amounts. Later recipes that just contain fruit rely heavily on sugar content. Often they contain candied rather than dried fruit and ample amounts of sugar. I just can’t really get behind those ingredients with any peace of mind. That being said, it is possible to find uncandied, low sugar, more traditional recipes that don’t contain the actual meat but are still very delicious and much better for you. If you’re up for trying your hand at your own recipe, here’s a good one from the 1700’s:

First combine the raisins, currents and apples in a bowl with the brandy and cider. Then cook the beef on low, once it is browned, add the suet and allow it to melt. Stir in the spices. Remove from heat and combine all ingredients. Then place in a jar (quart jar works well) to sit for anywhere from 2 days to 2 weeks. You can then use the mincemeat in any recipes that you find interesting. If you are going to make a pie, you will need a lovely crust, pour in the ingredients and then bake in a 400 degree oven for about 45 minutes, or until the crust looks golden brown.