From a culinary perspective, Cardone is interesting and a great choice for Thanksgiving Dinner. 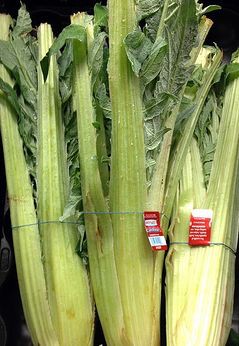 At first glance it could be very easy to mistake Cardone for an interesting looking Celery. Don’t be fooled, cardone is actually related to the artichoke and while it has a slightly similar texture to celery, it can’t be eaten raw and it has its own distinctive flavor. I came across a bunch of cardone in my local market and decided I had to bring it home and give it a try. First, I had to do a little research and figure out what it was.

Cardone is a member of the thistle family, it is also sometimes referred to as artichoke thistle. It is native to the Mediterranean but has made its way to appropriate climates around the world. It was apparently first domesticated by the Romans and then spread across Europe and the Middle East during the Middle Ages. According to historical data written around the 15th century, it was a highly prized addition to the table and figured prominently in the dietary repertoire of Europe, Mediterranean and even in time, with the pilgrims to the “New World”. According to written records, Cardone was first introduced to America by the Quakers. It was then first cultivated in the gardens of Monticello by Thomas Jefferson. So, in its own way it is a perfect flavor to find during the Thanksgiving holiday.

Although, it resembles celery it is not as easily prepared as celery. It is a thistle and as such contains tiny barbs in the stalk and are quite bitter in their raw state. To prepare them, it is recommended that they are first either soaked in salt water for an hour or two, or parboiled in salted water. Once they are prepped they can then be cooked in a variety of ways.I’ve prepped mine by soaking in salt water. I then diced up a small section of the stalk and sautéed it in butter to have with eggs for breakfast. It was delicious. Earthy and dense but also a little crunchy; all in all a great addition to the meal. I will be making the rest of the stalks into a Cardone au gratin. Really once they are prepped they can be fried, baked, stir-fried, boiled, or any number of other options. 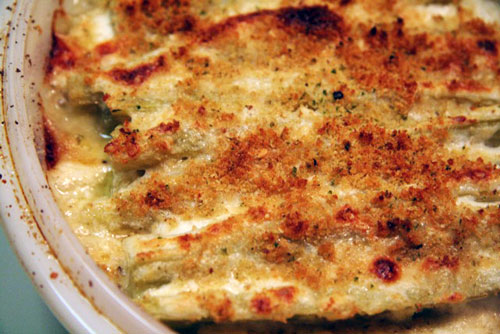 From a health perspective, Cardoon is a great resource for nutrients and phytonutrients. It contains things like potassium, magnesium, and copper, Vitamin C and folates. It’s a great source of fiber, with most of it being in the form of inulin, making it highly beneficial for your gastrointestinal health. From a phytonutrient perspective, it is fantastic. Since it’s in the thistle family, it contains things like silymarin, caffeic acid, and luteolin; all of which help with cellular detoxification and regeneration. Silymarin is the chemical compound found in milk thistle, which research suggests can help the liver repair and prevent further damage. Studies have shown that people suffering from liver damage due to consumption of NSAIDs (non-steroid anti-inflammatories, like ibuprofen and aspirin) experienced regeneration of healthy liver tissue. Silymarin and other chemical compounds found in all the thistle relatives have a chemopreventive effect while also aiding in the reduction of oxidative stress and systemic inflammation. In other words, artichokes and their relatives are yummy stuff.