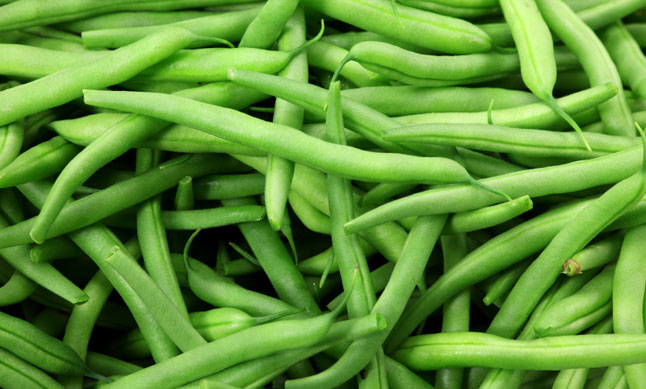 Crisp with a sweet, grassy flavor, a handful of raw green beans makes a delicious snack. 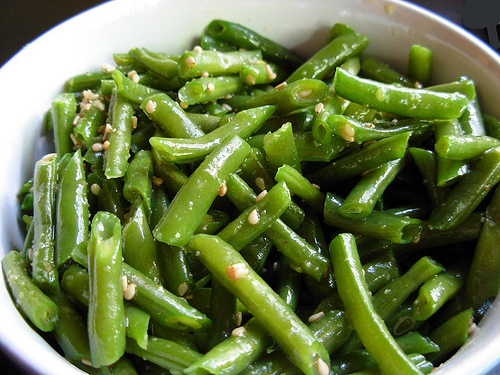 Green beans, specifically the variety phaseolus vulgaris, which is the one that will be found on many a Thanksgiving Day dinner table across the U.S., originated in South and Central America. Archeologists have found cultivated varieties in cooking vessels that carbon date around 7000 BC.
This particular variety of green bean seems to have made its way to the European continent and through the Mediterranean via Columbus’ voyage in 1492. According to historians an entry in the travel diary dated November 4th, 1492 discusses the discovery of cowpeas, fava beans, and this particular variety of green bean. Further discussion in culinary texts can be found in British cookery books around 1543, demonstrating successful cultivation.

Fresh green beans can be a culinary delight. They have a subtle flavor and impart a nice crisp texture, of course they can also be a culinary nightmare if overcooked or canned. They can be steamed, sautéed, stir-fried, boiled, grilled, or even enjoyed raw. I love to use them on veggie trays during the holidays as they make great dipping veggies. 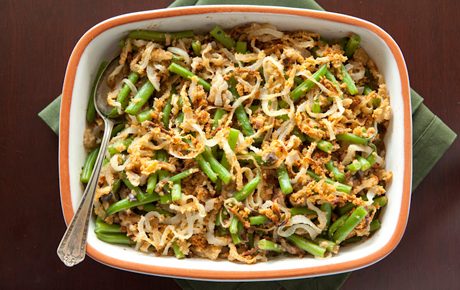 From a health perspective, green beans are a great source of fiber and nutrients like vitamin C, K and manganese and folate. As a phytonutrient source they are rich in chlorophyll and believe it or not, they are a great source of carotenoids and neoxanthins, nutrients typically found in red and orange vegetables. Carotenoids, flavonoids, polyphenols, leucoanthocyanins and catechins help with things like cardiovascular disease, systemic inflammation, and insulin management. Interestingly, green beans also contain a chemical compound that assists in the utilization and management of carbohydrate starch. Several studies have demonstrated that regular consumption of an extract derived from the bean phaseolus vulgaris resulted in weight loss and decreased fat mass, while maintaining or increasing lean muscle mass.

Thoughts: If you are used to having the infamous (and often dreaded) green bean casserole as part of your Thanksgiving Day meal, it’s worth making it from scratch, using fresh beans and other fresh ingredients.