Succotash is fun to eat, with its variety of textures and mouthfeels; sweet corn kernels mixed with lima beans. 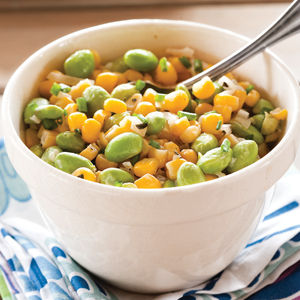 According to historians, the word ‘succotash’ comes from the Narragansett language. The Narragansett are an Algonquian Native American tribe living in the Rhode Island area of New England. There is speculation that the Native Americans shared the recipe for Succotash with the colonials as it was a staple in the Native American diet, a casserole of corn, beans, and fish or game. The combination of corn and beans provides a complete amino acid combination, coupled with a full protein the dish provides a simple meal that is hearty and nutrient dense.

From a culinary perspective, I don’t know about you but I have made a concerted effort to avoid succotash at all costs ever since childhood. Then I had the opportunity to taste a simple casserole of fresh ingredients and it was delicious. The basic ingredients can serve as a versatile foundation for a hearty and traditional fall meal.

From a health perspective, succotash is a nutrient dense meal. The beans are an amazing source of fiber, protein, and various minerals and vitamins. Research suggests that lima beans have a significant amount of isoflavones and plant sterols that help protect against breast and prostate cancers. They also lower cholesterol and balance blood sugar levels. Research also demonstrates that beans are a significant source of L-Dopa which is a precursor to Dopamine in the brain and can help protect against Parkinson’s Disease and also various dopamine-dependent mood disorders. 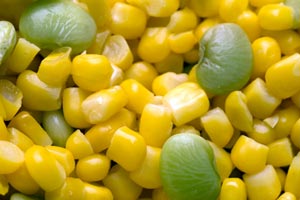 Couple that with corn which is high in fiber, vitamins, and minerals. Also a good source of vitamins A and B and minerals like zinc, magnesium, copper and iron. It provides quite a variety of antioxidants that help eliminate oxidative stress and decrease risk of cell mutation that leads to degenerative disease and cancers.
One caveat: traditionally, corn is a staple food and has served humanity well as one that fortifies the body. I believe that heritage and unadulterated varieties of corn still do provide more of a health benefit than not. Unfortunately, we are inundated with some variation of gmo corn product in almost every kind of foodstuff so we get an over abundance, most often without even realizing it, of corn in our diets and it does take its toll. Fresh, unadulterated corn is what you want to use if you are making this particular dish.