Maple syrup is a complex combination of sweet and earthy with hints of caramely goodness, in fact, it's so complex that even food scientists have a hard time isolating the chemical compounds and taste structures. 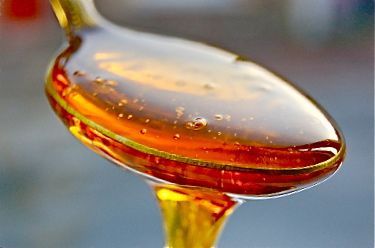 Maple syrup is traditionally made from the sap of a maple tree. The nuances of flavor can change depending on the type of maple tree and also what time of year the sap is extracted. According to archeological records and oral tradition the first production of maple syrup from the sap of the maple tree originated in North America by native peoples indigenous to the Northeast.

During the winter the maple tree stores starch in its roots, as the season changes and temperatures begin to rise with the onset of spring, so rises the sap from the roots to the branches of the tree. The trees can be ‘tapped’ and the sap is collected and then processed by heating and boiling under just the right conditions to form an invert syrup. The classification system for maple syrup has recently changed so that currently syrups that fall into a Grade A category can have a pretty wide variation in flavor and coloring, so long as they contain the basic appropriate flavor. Anything that does not meet the flavor standard is classified as either Processing grade or substandard grade, neither of which is allowed to be sold to the public. 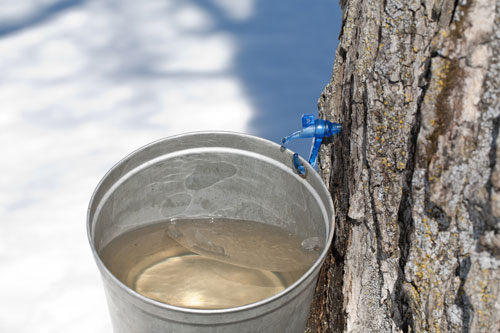 From a culinary perspective, real maple syrup is a delicious addition to just about any meal sweet and savory. What’s not to love about pouring delicious maple goodness over some pancakes, waffles, or oatmeal, or baking it into cakes or pies. It is even a scrumptious addition to savory meals like maple baked ribs or sausage. It is one of my favorite sweeteners in various raw dessert recipes and it makes a great marinade for wild game. One recipe in particular calls for marinating and then slow cooking venison in maple syrup. I haven’t tried that one yet, but I will.

From a health perspective, maple syrup is interesting. The pop culture health world touts that it is far superior and more healthful as a sweetener than other sweeteners. While there may be some truth to that, it is still a sugar so it’s best enjoyed in moderation. For the most part maple syrup has only a minimal amount of minerals like zinc, iron and manganese, however from a phytonutrient point of view the prospects for nutrient benefit expand pretty well. Studies suggest that pure maple syrup is packed with antioxidants and phenolic compounds that help manage things like oxidative stress, systemic inflammation and metabolic function. Research on specific phenolic compounds demonstrate that the chemical composition of genuine maple syrup has an antiproliferative effect on colon cancer cells, while also encouraging defective cells to self-destruct. The caveat? It has to be the real deal; not maple flavored sugar water, which is what many of the cheaper products are. If it says maple flavored, avoid it. The only ingredients on the list for real maple syrup should be, well, maple syrup.