Sweet, salty, slightly earthy, and then back to sweet; coconut water is refreshing and tastes almost umami with its complex nuances of flavor. 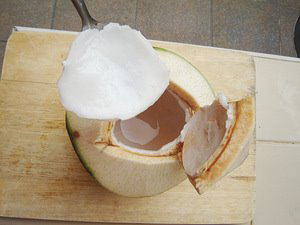 Coconut water is the liquid from young, green coconuts. In its natural state straight from the coconut, it is quite delicious and nutritious.  Coconut water has been getting quite the critical acclaim over the past few years as yet another superfood. The marketing tactics touting the health benefits of coconut water have been so successful that the production and sales are now a billion dollar industry.

From a culinary perspective, coconut water is most delicious in its most natural state; either straight from the coconut or at least as unprocessed as possible.

It is a great addition to raw soups and stews or as a refreshing drink. I love to get the whole young coconut, drain off the water, then scoop out the fresh inner meat and use it to make various raw food dishes.

From a health perspective, coconut water gets very interesting. If you pay attention to the marketing, you can’t help but be amazed at the health benefits you will receive from drinking that carton of coconut water from the refrigerator section in the market.  It’s better than any sports drink, provides you with more energy that a cup of coffee, boosts your immune function, perks up your cognitive function and increases your digestion...what’s not to love???  Too good to be true? Maybe... 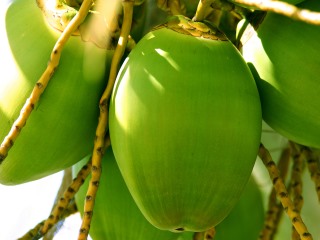 Fresh, young coconut water is indeed packed with vitamins, minerals and other phytonutrients. One claim to fame is that it is full of the electrolytes necessary to replenish athletes during workouts. Historically, marketing has suggested that it is better than any other sport drink on the market and supplies all the nutrients necessary to keep the body in balance while working out or playing hard.  Research suggests that this may indeed be true to some degree. Fresh coconut water does possess an admirable amount of electrolyte and in combination that works very well for balancing the human body. Unfortunately, not quite enough to serve as the replenishing super drink that marketing was suggesting. Several coconut water companies have had to remove those claims and pay out several million to settle a class action suit.

To be fair, the initial impetus for those types of health claims was grounded in some truth. Coconut water from young coconuts is pretty close to our optimal balance. In fact, close enough that in some tropical regions in situations of extreme emergency, coconut water has been used successfully in plasma transfusions. Yep, that’s right, intravenous coconut water with no reported adverse effects.  When news of these studies hit the public market, the word soon spread that coconut water was the same chemical makeup as human plasma and therefore could be useful for all sorts of miraculous health interventions. Unfortunately, this is not the case; coconut water is not the same as human plasma. That being said, it does absolutely possess an amazing amount of minerals; potassium, calcium, magnesium and sodium and an amazing array of vitamins like B and C. 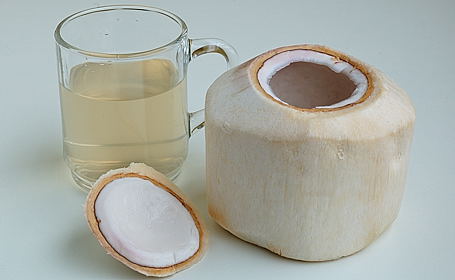 This wide variety of nutrients can indeed help boost immune function, increase digestive quality, lower cholesterol, and any number of other health benefits. So, what’s the catch?  The key word is “fresh” coconut water. Unless you are getting it straight from the coconut or shortly thereafter in its raw state, you aren’t drinking fresh coconut water. Chances are, what you are drinking is heat pasteurized coconut water with additives, including sugar and preservatives...which all adds up to pretty significant sugar consumption. A typical 330ml container of coconut water contains the equivalent of 6 teaspoons of table sugar (yep, 6 teaspoons) and that doesn’t include the sugar that is often added to enhance flavor.  Also, once processed, while coconut water does still contain minerals and some vitamins, the heating process not only destroys the taste but also kills off almost all of the other ingredients like enzymes that contribute to health.  This is typically why sugar and other flavor enhancers are added back in with some preservatives.  The downside of drinking coconut sugar water? It increases candida in the gut, contributes to an imbalance in energy, decreases immune function (studies show up to 40% decrease lasting several hours after sugar is consumed), and contributes to “brain fog”. Notice that the pasteurized results are almost the exact opposite of the benefits of fresh coconut water? Pretty crazy how just one little process and a few additives can completely adulterate something.

The bottom line? Read labels and don’t fall for the hype. Fresh young coconut water does indeed possess health benefits, is refreshing, and thirst quenching. It also possesses some great bioactive components that help soothe digestion and boost metabolism, however, once it’s processed and packaged for the store shelves it no longer resembles what you get straight from the coconut and while it is definitely better than picking up a soft drink, it isn’t maybe your best option if you’re avoiding sugar in your diet.