Tart and tangy, I’ve been waiting all year to try a damson plum and they are finally in season and ready for picking. 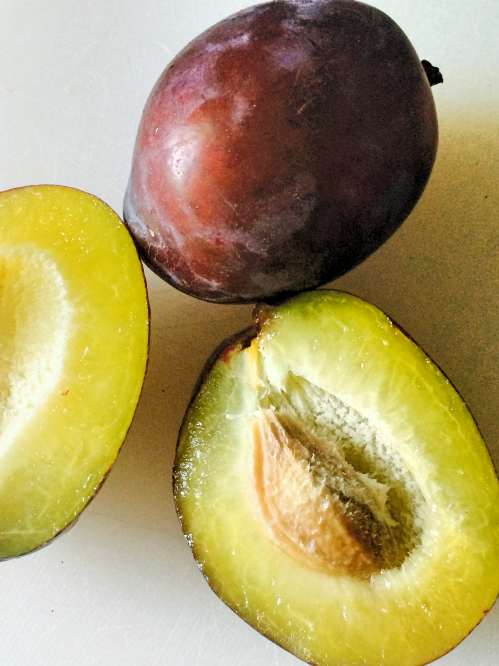 I first was acquainted with them last year but only vicariously, so was determined this year to experience them firsthand as they ripened on the trees waiting to be picked.Damson plums are abundant in the English countryside and according to genetic testing, they seem to be particular to the region, even though there are theories that suggest otherwise. The Damson can also be found in very small areas of the U.S. where they were introduced by the English colonists, although, there are many rival varieties that give them a run for their money.

From a culinary perspective, the Damson is a great fruit for making jams, jellies, pies, or other backed goods. It is not too sweet and it has a strong texture with a good amount of pectin to help give it a thick texture. Because it is tangy as well as sweet, it pairs well with game and other meat dishes.  I have a batch of damsons that are going to find their way into a baked crisp.

Damsons are also used to make gin and wine, something I haven’t tried yet, but you can bet it’s on my list.  Apparently, they make a good dye as well.

From a health perspective, Damson plums are right up there with their other plum relatives providing vitamins, minerals and phytonutrients that fight cancer, oxidative stress and systemic inflammation.  They are high in fiber, pectin, as well as vitamins and minerals that contribute significantly to gastrointestinal health, including inhibiting colon cancer. Damsons are high in potassium and magnesium, making them great for heart health. They also have a significant amount of copper and iron, contributing to endocrine balance and increasing red blood cell counts.

For the cobbler topping 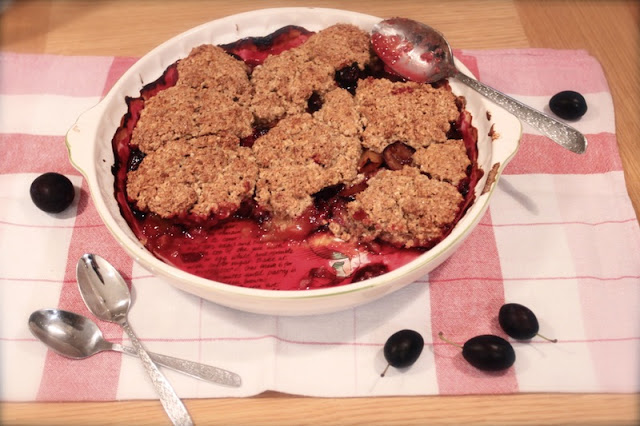 2. For the filling: butter a 20 x 30 cm shallow ovenproof dish with plenty of softened butter. Scatter the damsons over the bottom of the dish, packing them in quite tightly.

3. Sprinkle over the sugar and tuck in the vanilla pod halves. Drizzle over the amaretto and dot with the butter.

4. For the cobbler topping: tip the oats, sugar (or dates) and almonds into a bowl and mix together.

5. Fold in the whipped cream to make a sticky dough. Gently tear off pieces of the dough and arrange on top of the damsons, covering as much of the fruit as possible.

6. Bake in the oven for about 45 minutes, or until the top is golden and the damsons are bubbling. Serve with ice cream or cream.