Ever so mildly tart and juicy, with the sweet earthiness akin to that of a cherry tomato, physalis peruviana was an enjoyable little addition to my evening meal. 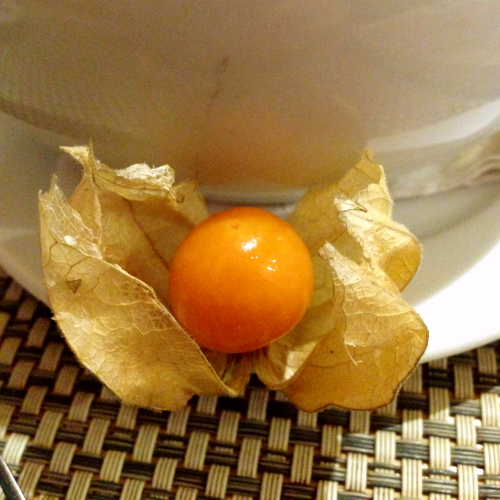 They are tasty but in truth, I think I am more enamored with their French name; Amour en Cage – Love in a Cage, than their flavor. I would eat them everyday just so I could say their name in French. (:

I first encountered these interesting little fruits last October in Salisbury while on a Mojo mission. They were the garnish on my plate. I was so enraptured by their natural outer packaging that I didn’t pay too much attention to their flavor; to be fair there was only one and we shared it among four of us so everyone could have a try. When I inquired further about them, I was told they were a type of gooseberry and left it at that. Then yesterday as I was wandering the produce section looking for something interesting and new, lo and behold, there was a very small stack of what I now know are called Physalis Peruviana or in French, Amour en Cage. Of course, I had to get some.

Once home I set about my research. Perusing nutritional and botanical databases, I learned that these juicy little treats are indeed sometimes called a Cape Gooseberry although they are really no relation to the common gooseberry. Rather, they are related more closely to the tomatillo and another plant called the Chinese Lantern; hence their slightly tomato-ey flavor. They actually look similar to a tiny tomato when cut in half, filled with tiny seeds and a similar cross section. I am completely in love with their delicate, papery outer covering and the way they reveal their inner golden goodness. 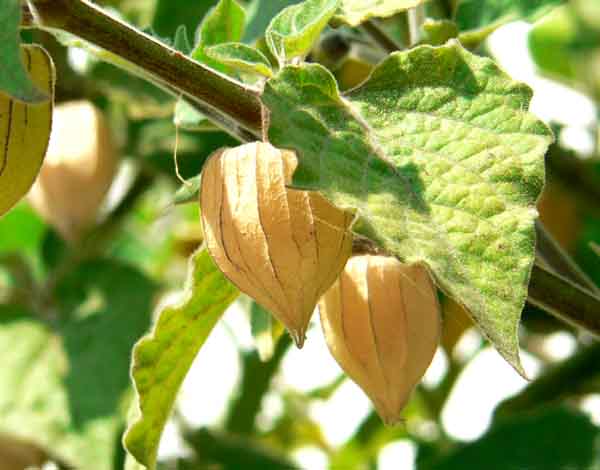 From a culinary perspective, once physalis are divested of their outerwear, they can be used in much the same way as a small tomato or even a gooseberry for that matter. They can be eaten raw, in jams and jellies, salads, sautéed, stewed and even pies or other baked goods.

From a health perspective, Amour en Cage will make you feel better just saying the name with as much dramatic flare as possible. (: with the added benefit of being a great source of vitamins, minerals and bioactive compounds that are highly antioxidant and anti-inflammatory. Studies suggest that the compounds found in physalis peruviana are highly beneficial to the liver, which corresponds with its use in Traditional Indian Medicine where it is a therapeutic intervention for Jaundice and other liver related ailments. Other really fascinating research suggests that a combination of bioactive compounds interact with cell mitochondria, resulting in two functions; healthy cells got healthier and malignant or mutated cells deconstructed. Pretty cool. Still further fascinating research demonstrate that these dynamic little fruits are a superhero in the battle against the radioactive pollution, in fact, they fall into the “radioprotective” category. If that’s not enough, they are also a significant source of melatonin, which is a key player in hormone regulation. Studies found in the database of International Atomic Energy Agency identify Amour en Cage as having these beneficial properties: antioxidant enzymes, nitroxides, and melatonin, antiemetic, anti-inflammatory. haemopoitic and immunostimulant compounds.

They forgot to add "linguistically pleasing" to the list.