Purple kohlrabi feels smooth and dense to the touch, with a shiny bulb base and long green foliage it has attracted my attention as I wander through the produce aisles. 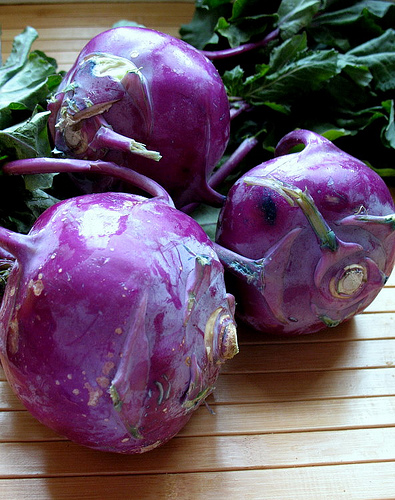 It looks slightly aquatic to me, the way the leaves grow out from the bulb.  I’ve seen kohrabi on the shelves before but never given it much thought, mostly because I realize I would have no idea what to do with it. I select one and bring it home and after a little research am on the way to making a meal.

Kohrabi can be eaten raw or cooked. To me it has a mouthfeel similar to red cabbage or broccoli stem. The taste is refreshing, slightly sweet but also a little extra something similar to a radish. I like it. Kohlrabi is in the brassica family. It is also sometimes referred to as German Cabbage, and its name translates into “cabbage turnip”.  I’m guessing because it looks like a turnip but tastes and texture resemble red cabbage.  From a culinary perspective, you can eat kohlrabi raw or cooked. It can be made into slaw or added to salads. It also fares well in soups and stews or even as a roasted veggie like many of its root brassica cousins. All parts of this veggie can be eaten, with the leaves making a great addition to sauté’s or salads as well.

From a health perspective, being in the brassica family, kohlrabi is a wealth of good stuff. Because it is newer on the scene and a hybrid of sorts, it doesn’t quite have the nutrient density that its counterparts have but still has quite a bit to offer. It is rich in Vitamin C, B, and A. It’s also a good source of minerals like potassium, copper, manganese and iron. 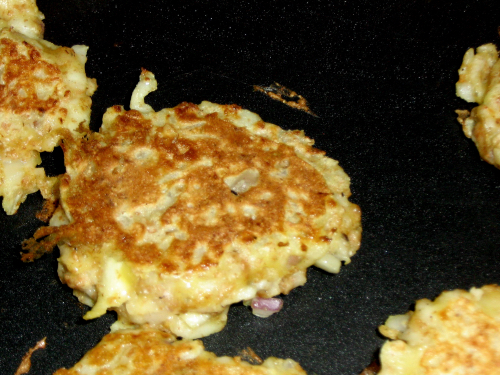 It contains many of the same phytonutrients that other brassicas contain and as such imparts similar health benefits. Research suggests that the isothiocyanates like sulforaphane help in the prevention of various cancers. They also support metabolic function, increasing the body’s ability to process nutrients and eliminate toxins. This makes them highly beneficial for decreasing systemic inflammation and eliminating oxidative stress.

One caveat: as with all things, it is possible to get too much of a good thing. The glucosinolates in brassicas like kohlrabi can contribute to thyroid issues and goiter if consumed in large amounts.

I’m making today’s kohlrabi into pancakes. I’ve shredded a cup of kohrabi, added an egg and some spices, with a pinch of baking soda and hey presto ... breakfast pancakes. (: