Zesty, refreshing, with a hint of pine or earthy citrus; fresh chopped cilantro stimulates my palate with its ‘exotic’ and earthy backnotes. 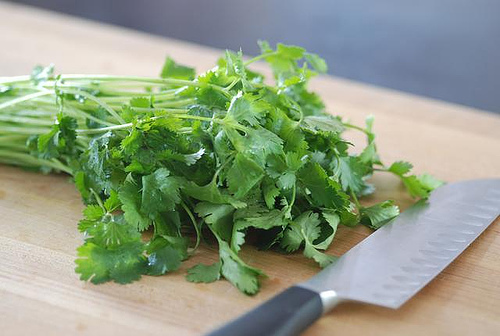 It’s my experience that people either love cilantro or they hate it. There doesn’t seem to be an in-between. What I describe as refreshing and zesty someone else describes as soapy and unappetizing.  Cilantro is a Mediterranean herb that has managed to make its way all around the globe. It is actually the name for the leaves of a coriander plant and features frequently in Mediterranean, Mexican and Asian cooking. It’s also sometimes called Chinese parsley. It can be used in much the same way as parsley or other fresh herbs, just be aware that not all of your diners will be in agreement as to whether it adds to the meal or ruins it.

From a health perspective, cilantro seems to have quite the reputation as a superfood. It is rich in vitamins, minerals, and phytonutrients. It is one of the best sources of vitamins K and A. It also packs in plenty of potassium, calcium, manganese, and iron. It is ridiculously prolific in the phytonutrient department; nutrients like, quercitin, kaempferol, pinene, limonene, just to name a few. All of these phytonutrients are big in the anti-oxidant and systemic inflammation arena. The help reduce oxidative stress and inflammation, decreasing your risk for degenerative disease and ailments. They also help balance blood sugar and manage insulin production. They are antimicrobial, antibacterial, and antiviral. Research suggests that eating the fresh leaves may help fight against food borne illnesses like salmonella.  The chemical compounds in cilantro also possess antibiotic properties, so not only do they help boost immune function but they also directly aid in fighting off any health sabotaging bugs. The most recently circulating news about cilantro is its ability to eliminate heavy metal toxicity in the body. According to several studies, cilantro does indeed remove heavy metal deposits in the body as well as assists in imparting an antibiotic effect to further eliminate any harmful bacteria that may be lingering as a result of toxicity. 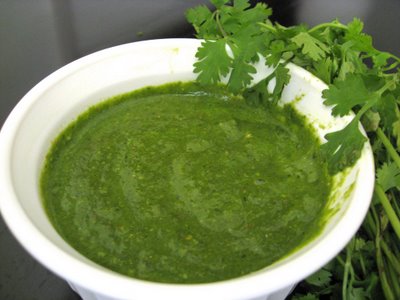 So, why do some people think cilantro tastes like soap while other people don’t? Apparently, it’s a genetic thing. Certain people have the heightened ability to detect aldehydes in their environment. Aldehydes are a common property in soap and fragrance. They are naturally occurring compounds in quite a few foods and essential/volatile oils.

If you love cilantro, this is a quick and easy chutney recipe:

Mix all ingredients in blender until smooth. Store in a sealed jar in refrigerator and use as a condiment. This will last a couple of weeks if sealed and refrigerated.