Purslane; zesty, not quite bitter, but also not quite sweet and smooth, juicy and refreshing. 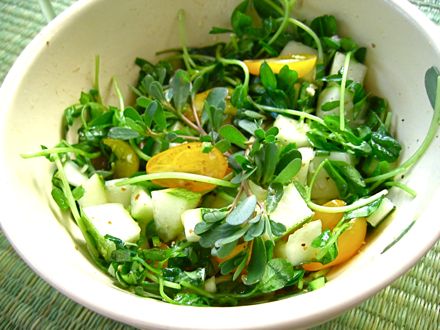 In a way, it reminds me of the bitter or peppery greens like dandelion, watercress, or arugula. It has an appearance similar to lamb’s lettuce only with fatter leaves and stem. It is considered a succulent, which is why its leaves and stem are fat and juicy; they store water. There are about 40 different varieties of purslane, both winter and summer. Apparently, all can be eaten and each has its own flavor quality and texture. In the U.S., purslane is typically considered a weed and an inordinate amount of energy and resources is expended trying to eradicate it from fields and gardens. It is, however, catching on in the culinary world and beginning to make its way into the market place and dinner plate. In other parts of the world, purslane enjoys a place in a variety of cuisines and has done for centuries. It is also known by other names such as qulfa, little hogweed, moss rose, and verdolaga. All parts of the plant are edible, seeds, leaves, and root.

From a culinary perspective, purslane can be eaten raw or cooked. It can be tossed into salads as a zingy and refreshing addition or it can be steamed or sautéed much like spinach. Some interesting combinations and uses from various other cultures are, combining it with tomato, feta cheese, garlic, onion, and olive oil; or use it to stuff fish or as an ingredient in tomatillo sauce. It also can be added to soups and stews or baked into casseroles. 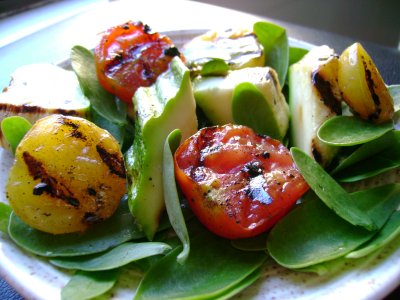 From a health perspective, purslane is an amazing source of a wide variety of nutrients. Given that it has typically been considered a weed in the western diet, there has been quite a significant amount of research on its healthful properties. It is packed with antioxidants and is a valuable resource for reducing systemic inflammation. Just one serving of purslane supplies roughly 60% of recommended daily intake of Omega 3 fatty acids. It is also an excellent source of brain happy chemical compounds like glutathione and melatonin; both of which help reduce the risk of Alzheimer’s and other brain related degenerative diseases. They also help balance mood and cognitive function. The beta carotene levels in purslane make it a great resource for skin, tissue, and bone health. Studies have shown that the chemical compounds in purslane provide a wonderful nutritional support to the body for recovery from stress and stress related ailments.  All this awesomeness means it could be worth a little foraging expedition to see if purslane is in the natural environment around you or at the very least on the shelves in your neighborhood market.