Sharp, piquant, spicy heat; black pepper is so commonly used in food it is easy to take it for granted and miss it’s amazing potential. 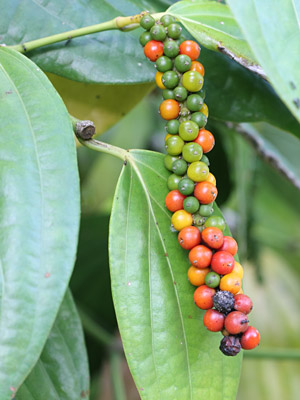 Piper Nigrum as it is officially known, is the a flowering vine, the part that becomes pepper is the ‘fruit’ that is produced by the vine. Even though pepper is spicy and has heat, it is not the same as a capsicum pepper, which are fleshy fruits and in a different family.

Pepper is one of the most popular spices in the world for both culinary and medicinal endeavors. It is also among some of the oldest spice and medicinal interventions recorded and currently the top on the commerce list.

From a culinary perspective, I would venture to guess pepper can be found anywhere that the preparing of food occurs; households, restaurants, cafeterias, etc. It seems to accompany food with almost unconscious wild abandon; in jars on tables, little packets in boxes, and even wrapped up tightly with little plastic knives and forks. Of course, it rarely travels without its counterpart “salt”.  It’s unfortunate that it is so ubiquitous that it is easy to take it for granted because truly there is a nuance to pepper that it akin to the variations and nuances in wine. The flavor of pepper is impacted by things like: terroir, when it was picked, how it was processed, and even what it is served with. There is black pepper, white pepper, red pepper (not the same as cayenne), green pepper...all of which are variations of the growth and terroir of the plant and each carries its own subtle yet distinct difference in flavor.  The more I’m learning about pepper, the more I’m in love with it and all of its variations. 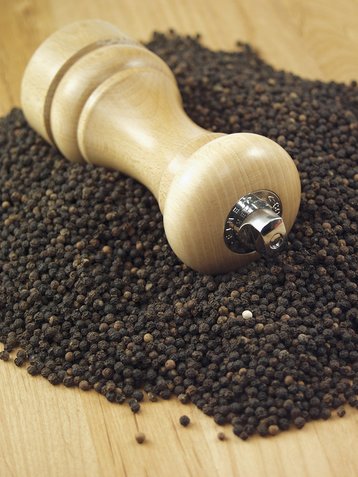 From a medicinal perspective, pepper has quite a history as well. Pepper stimulates the tastebuds and encourages the production of digestive fluids. It also has diuretic and diaphoretic properties, making a good resource for detoxifying the body.  Research demonstrates that it is antimicrobial, antifungal, and antiviral, perhaps those organisms don’t like the chemical compounds that also make it seem hot to the palate. Studies have been conducted that demonstrate it is also an anticonvulsant, aiding in the elimination of convulsions and seizures. The chemical compounds also make highly beneficial for eliminating systemic inflammation and oxidative stress.

The next time you sit down at the table and reach for the pepper, maybe take a moment to give it closer attention and appreciation.

In a mixing bowl, stir together the dry ingredients (almond flour through salt).

In a separate mixing bowl, mix together the melted coconut oil, maple syrup, vanilla and egg (make sure the melted oil is not actually hot).

Add the dry mixture to the wet and stir just until combined.

Wrap the dough in plastic wrap and refrigerate for 2 hours or until firm enough to roll into balls.

Preheat the oven to 350°F (175°C) and line a baking sheet with a piece of parchment paper.

Roll the dough into 1" balls, roll in the sugar or coconut, and place 2" apart on the prepared baking sheet. Here is choice point, you can either leave them rolled into little balls or press them a little bit. Either way is tasty, it just yields a slightly different texture.

Bake for 8-10 minutes or until the tops are firm and no longer wet. They will not brown but may crack a little.

Remove to a baking sheet or wire rack to cool completely