Nutty and chewy, with hints of sweet, grass, and even some bitter; the flavor of buckwheat is an enjoyable addition to my afternoon meal. 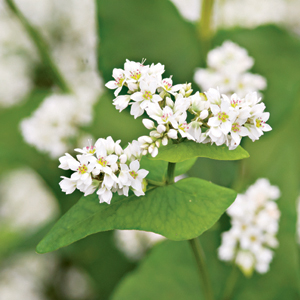 It’s one that I love but don’t really have too very often for some reason. Buckwheat, despite its name, is not actually a type of wheat or even in the grass family; rather it is considered a pseudo-cereal and is part of the broadleaf plant family, along with amaranth and even rhubarb. The seeds come from the buckwheat plant are similar to sunflower seeds, with a hard outer shell and a softer inside, although not quite soft enough to eat raw without soaking or otherwise breaking down the cell structure.

Buckwheat has been part of the human dietary repertoire since about 8,000 BCE, with actual recorded reference to cultivation occurring in 4,000 BCE. It is thought to have originated in areas of Asia and then made its way around the globe. It’s a mainstay ingredient for many cultures, from Japanese Soba noodles to French Galettes, which are basically buckwheat crepes (quite delicious, I might add).  From a culinary perspective, buckwheat is quite versatile; it can be prepared as the whole grain or used as flour. As the whole grain it is can be eaten hot or cold, added to salads, stews, soups, stir fries.... even eaten as a delicious breakfast cereal. As a flour it can be used in much the same way as most flours. The only thing to be aware of is that it has no gluten so it makes for more dense baked goods.

From a nutritional perspective, buckwheat is a great source of plant-based protein as well as a variety of vitamins, minerals, and other phytonutrients. It is a great source of magnesium, manganese, copper, zinc, and B-vitamins. Buckwheat contains tannins, catechins, and rutin; all of which contribute to its antioxidant qualities and aid in the reduction of systemic inflammation and oxidative stress.

Place soaked buckwheat groats in food processor or blender, along with the almond milk, chia seeds, and vanilla. Process until combined and slightly smooth. Now add in the sweetener and cinnamon to taste