An unassuming little herb that has somehow been relegated to the role of garnish...but don’t be fooled and don’t leave the garnish because Parsley is a queen among herbs. 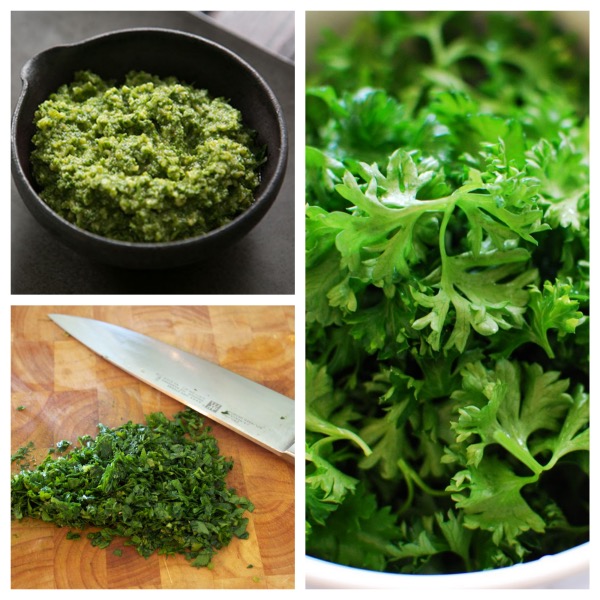 Parsley has been referred to as the “jewel of herbs” and a culmination of all things green. There are several different varietels so the flavor changes with each. The parsley I am tasting today is a curly leaf, it is grassy with a hint of bitterness or piquant spiciness. It is also very refreshing, the first nibble was like infusing my tastebuds and mouth with a little bit of sunshine. This only makes sense, because Parsley is packed with chlorophyll and vitamin C and many, many other phytonutrients.

From a culinary perspective, curly leaf parsley has a more subtle almost bitter quality as I noted, and flat leaf parsley is considered more robust and complex. Flat leaf is typically the kind called for in Mediterranean or Italian cooking.  I like adding fresh parsley to things because it seems to perk them up and add an extra dimension of flavor that is bright and interesting.

From a medicinal or health perspective, Parsley is pretty amazing. In fact, first recorded use of parsley is pharmacological; it didn’t seem to work its way into the culinary world until the Romans started using it in various dishes. At least that’s the recorded history... I can’t imagine someone didn’t find it delightful and throw it in a soup just for its flavor some time before the Romans.

Parsley is high in Vitamin C and a great source of Vitamins A and B. It is packed with antioxidants that help decrease the impact of oxidative stress. It also has flavonoids and volatile oils that contribute to things like increasing glutathione (good brain stuff), decreasing cancer and tumor causing agents. In fact, research demonstrates that the volatile oil myristicin inhibits the formation and growth of tumors. Parsley is anti-inflammatory, heart healthy and immune boosting. In the world of medical herbalism it is considered a diuretic that helps cleanse and balance intracellular fluids. It is an emmenagogue, which means it stimulates female reproductive hormones (so if you’re pregnant, throwing parsley in a juicer is not a good idea). It’s also a carminative, meaning it helps with digestive issues (including flatulence) which is why I think it first ended up on plates. Chew on a little parsley after a meal and help everything digest well, and bonus...freshen your breath.

Ways to get more parsley in your diet? Sprinkle it on your food, makes some parsley pesto, add it to soups, stews, and sauces. Put it on the side of your plate as an after meal digestive. (:

Put the walnuts, parsley, cheese, garlic, and salt in a food processor and pulse for a few seconds to combine everything ( you don’t want to puree it). Scrape down the sides of the bowl, then pulse again. Drizzle in the olive oil while the machine is running just long enough to incorporate the oil, about 20-30 seconds.

Use immediately and/or store it in the refrigerator and try it out on a variety of dishes.