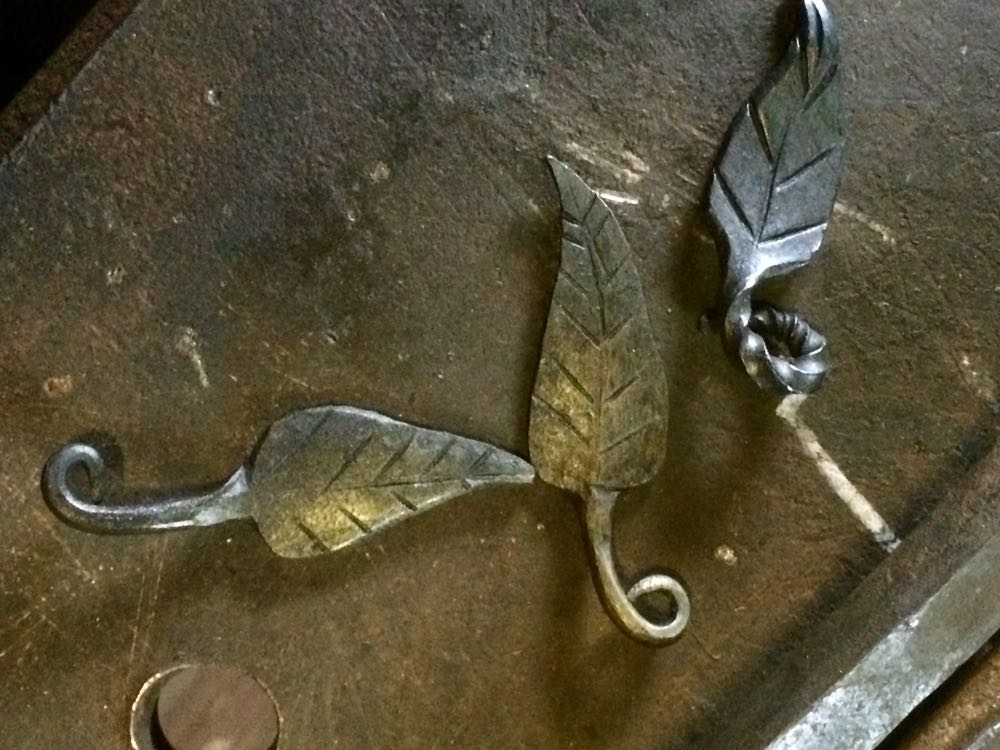 The MojoMakers had been in the UK for about a week and were only just drying out from two days of English rain when we set off for the tiny village of Buscot.  Their first drenching had been on a day’s fly fishing tuition; the second, and the heavier of the two, was on a foraging expedition in the beautiful Savernake Forest. So the opportunity to visit a blacksmith’s forge promised to be a warmer and drier adventure by far.  Everyone was excited. I’d arranged the visit through my youngest son Morgan who had qualified as a smith in June after three years at the UK’s National School of Blacksmithing.

I’d contacted his friend Tom Southernden who had qualified a couple of years and runs the 250 year old blacksmith’s forge at Buscot. Tom would be happy to host Bohemian Mojo and show Stephanie, Majken and Michelle the basics of blacksmithing. The village is idyllic, built from the honey coloured stone of the Cotswolds, and lies on the banks of the River Thames in Oxfordshire.
From the first moment we stepped into the forge we were all captivated by Tom’s warm-hearted welcome into his world.  His dreadlocks belie the clichéd image of a blacksmith and he is, in essence, a thoroughly modern young man in a very ancient trade.
But Tom is devoted to his craft and keenly aware of smithying’s history and its crucial role in our social evolution. And what a world with the ancient walls covered in traditional tools and the hearth, which was still cold, at the centre of this magician’s workshop.  Blacksmithing fits well into the Bohemian Mojo philosophy as it is one of the ultimate crafts in sustainable, handcrafted manufacture. Once upon a time all the other crafts relied on the smith for tools and there was a time when no community could function properly without a smithy. That’s all changed in our industrial, globalised world but the demand for hand crafted quality is on the rise and blacksmithing is seeing a renaissance; certainly in the UK and continental Europe.
It was no accident the Viking’s named their god Odin in honour of the blacksmith’s craft. And the Celts too have Brigit, the goddess of hearth and smithy, who was the pre-eminent female deity in their pantheon. The Druid’s kept a flame burning constantly in her honour in their grove at Kildare in Ireland.
But back to Buscot where Tom began the Mojo visit by lighting the fire on the forge; a simple ritual which blacksmiths have performed for millennia.  The whole atmosphere changed with that simple act and the fire became a source of fascination and a place of alchemical conjuring.
It’s the fire that’s at the heart of the process and an understanding of the fire is central to the skills of the smith.  As Tom explained ‘you cannot make the metal hotter than the fire.’  So he controls the bellows to make the fire hotter or cooler as he needs it.  All the while he stares into the fire when the metal is being heated because the colour of the metal describes how hot it is.
As Tom chatted animatedly about his craft he took a length of rod, no thicker than an index finger. It was mild steel and known as stock metal. Still chatting easily he place the end of the rod into the flames of the forge with a pair of tongs and left it there until it glowed orange.  It was ready. He took it to the anvil and began to work on it with hypnotic fluency all the while explaining what he was doing.
Like me, the Mojo sisters were mesmerised by the whole process; the fire, the brightly glowing metal and the ringing of the hammer on the anvil.  And something was beginning to take shape at the end of the long piece of stock metal. Soon Tom was separating his creation from the rod with a chisel.  The piece was then in and out of the forge as Tom heated it to make it malleable before working on it again.
Some delicate work with a small chisel and his piece was nearly ready. He scourged it clean with a wire brush then rubbed it with linseed oil which burnt from the heat as it soaked into the outer molecules of the metal.  Finished.
Tom had forged a beautiful, veined leaf key fob which he placed aside to cool as he went on to show us all the intricate process of fire welding. Fire welding is the process of joining two pieces of metal together in an almost unbreakable bond.
Morgan was on hand and, as Tom explained more of the ancient craft, he took over to forge two more leaf shaped key fobs. All of them were similar but none was the same; each one a simple, individual expression of the blacksmith’s own unique style and artistic quality. The Mojo crew was delighted with their gifts as a reminder of an amazing alchemical day.
I confess I found it quite emotional as I have often seen the results of Morgan’s work but I had never seen my son actually create a piece of blacksmithing before.
I think we were all amazed at the finesse both these young men had shown. We imagine, I suppose, that the blacksmith uses great force to wrought his work out of metal which seems to come to life in the flames. But on occasion both Tom and Morgan were almost brushing their metal leafs to life with delicate flicks from their hammers.
Afterwards we did witness the power of blacksmithing when they demonstrated how larger pieces are worked with one man as the smith, the other the striker. Working in rhythm they each struck the glowing metal in turn until the anvil was making its own tune. Very impressive.
Our morning at Buscot Forge had been a wonderful experience. We all agreed too that Tom’s passion had made him a fluent and engaging teacher.  And what great role models those two young men are for so many young people who have lost their souls to the digital age.