A week or so ago a young girl called Matilda Jones was paddling on the edge of a lake on Bodmin Moor in Cornwall when she found a four-foot long sword in the shallows. Unusual in any lake at any time, you might think. But this was no ordinary lake, this was Dozmary Pool, where legend has it the Lady of the Lake raised her arm above the mirror of the water to receive Excalibur from the fatally wounded King Arthur.

What a wonderful story and what a magical moment for the excellent Matilda who’d only been told of the Legend of Excalibur by her father moments before she found the broadsword.  It turned out to be a film prop probably no more than thirty years old but who cares King Arthur’s spell had been cast again and, in time, Matilda’s story will undoubtedly join the long catalogue of Arthurian legends. So, inspired by Matilda, the new  Lady of the Lake, we thought we’d look again at the legends, the myths and the mists of romance that surround the ‘once and future King’ and try to piece together what’s really known.  It’s a big story and we’ll outline what we know in a Bohemianmojo mini-serialization.

On the way we’ll explain the source, and the significance, of the saga of the Lady of the Lake together with some other facts and insights that give a fascinating picture of who the real Arthur may have been. There’s no doubt the truth of Arthur lies in the Dark Ages, the largely unchronicled centuries that followed the sudden retreat by the Romans from their most northern conquest, Britannia, around 400 AD. 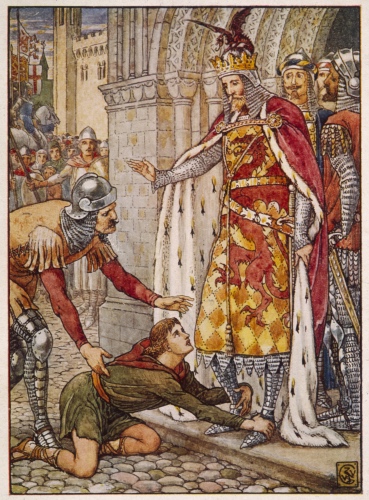 So let’s look first at the legends of Arthur? Well to be honest there are as many legends are there versions of the story and they’re a heady mix but they all go back to the ancient Welsh poems of the Bards Taliesin. These poems, which mention the heroic war leader who led the British against continental invaders were taken up by Geoffrey of Monmouth

. Geoffrey was a medieval Tolkien who knew a good story when he heard one and significantly Monmouth is right on the disputed border between Wales and England and no doubt he got his ideas from Welsh sources.

Geoffrey went on to transmogrify the Celtic story of Arthur into a British civil war between the forces of good, the King himself and his Knights of the Round Table, and the forces of evil represented by Mordred and his cruel army. There’s Excalibur of course, which is an early manifestation of a weapon of mass destruction. To add to the mix there’s love and betrayal played out between Guinevere and Lancelot and a dash of immortality with the fabled wizard Merlin as a sort of all-seeing puppet master in the background. The concept of chivalry was at the heart of Geoffrey’s version in tune with the evolving culture of ‘knightly behavior’ right across Europe.

Other elements of the story feature Morgana his evil half sister, the slaying of giants, the deeds of valor performed by his Round Table knights and Arthur’s epic last Battle of Camlan where he was mortally wounded. Perhaps the most culturally important of all those myths and legends at the time of this re-purposing of the Celtic stories was the linking of the Quest for the Holy Grail to Arthur, bestowing him with the blessing and legitimacy of Christianity.

It’s such a wonderful story with such a rich caste that almost every corner of the UK now claims a bit of Arthur. Camelot, his shining capital of virtuous values, has been claimed by Cornwall at Tintagel and in Wales at the Roman fortress of Caerleon.  Carlisle on the Scottish border lays claim to Camelot and so does Winchester, once the capital of the West Saxons – ‘Wessex’ – where a replica Round Table graces the town hall to this day. The monks of Glastonbury in Somerset claimed it too and conveniently found his marked grave within their Abbey grounds to create a medieval theme park and turn a pretty penny from pilgrims through their scam. Geoffrey of Monmouth backed Caerleon, as he was probably bound to do as it lies just twenty miles to the south of his home town.

The truth is there are as many locations, fables and legends connected to Arthur as there are learned treatises, novels, movies and cartoons about him. Each one adding its own interpretation and its own ‘history.’  Perhaps my favorite example of the legend being carried forward is a truly spectacular Arthurian pageant at the Camelot themed Excalibur Hotel on the famous Las Vegas Strip. It was a great evening with some breathtaking horsemanship as the knights battled but when King Arthur’s son Christopher was introduced I knew we were slightly off message with the history. First I’d ever heard of Prince Christopher. I’m sure the producers’ aim was to create a flamboyant homage to the legend of Arthur not some dry history. But still, I wonder, how many of the countless thousands of tourists who’ve watched that family show went away thinking Arthur’s first born was called Christopher? Actually, isn’t this exactly how fables are created and legends made?

Little was written in the Dark Ages so we get a great deal of smoke from the flames of history and we have to look for the sparks of truth. Like all great stories we have to start at the very beginning and in the case of Arthur this requires some additional re-learning of British history. In the English school system it basically starts with the Anglo Saxons who crossed the North Sea from Anglia and Saxony.  In my day Welsh schools went back a little further to teach about the Celtic tribes of the Iron Age who were quelled by the Romans. Tribes like the Brigantes in the North of England, the Silures and Ordivices in present-day Wales and, famously, the Iceni who nearly threw the Romans out of Britain under their fierce and famous Queen Boudicca. 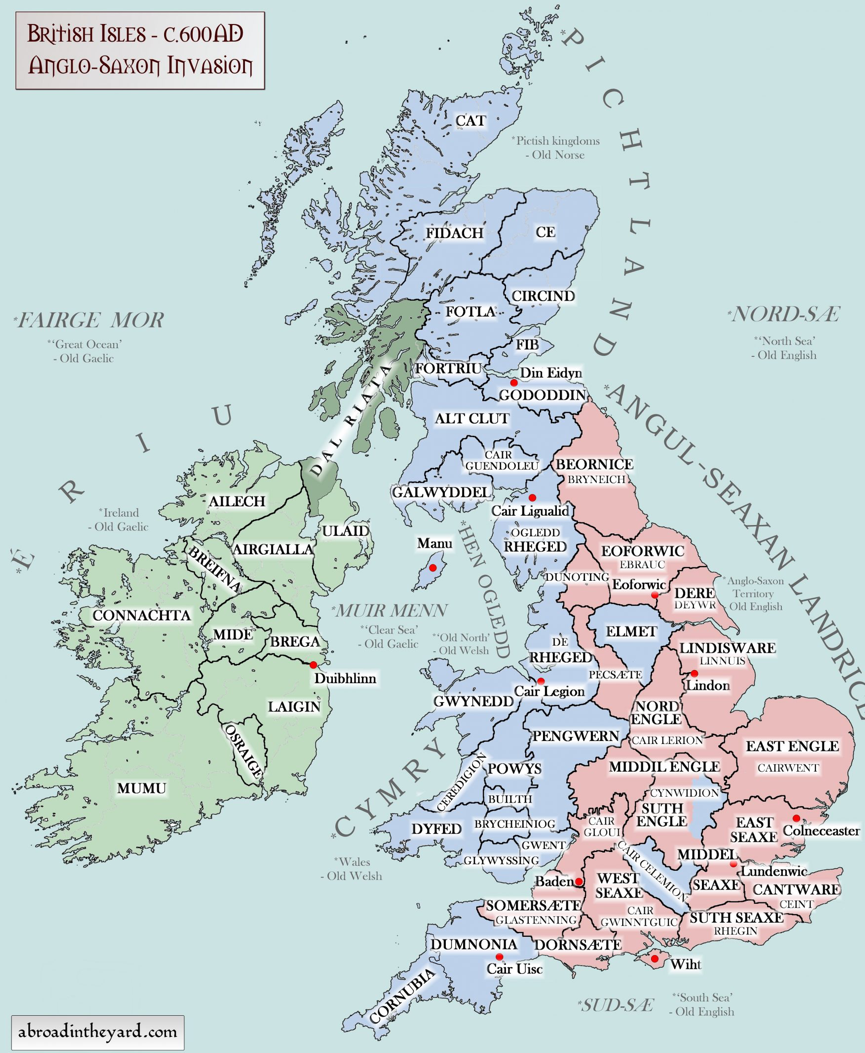 In what is now modern Scotland, Pictish tribes, like the Caledonii and the Venecones, were kept at bay by Hadrian’s Wall.  In time many of the Southern tribes became Romanized and interacted with their conquerors to be termed Romano Britons although there are surprisingly few Roman DNA markers present in the modern UK population.  Then, after nearly 400 years, the Empire began its famous Decline and Fall and became desperate for troops to defend their ‘civilization’ from Barbarian attack. There was a steady decline in Roman military investment in Britain, which was only a marginal northern province. Rome finally split into separate Eastern and Western Empires and in 407 AD the Emperor Honorios wrote to Romano-British noblemen telling them they could no longer depend on Rome. ‘Defend yourselves’ he told them.

What followed was anarchy with Pictish and Hibernian tribe from Ireland raiding and settling in enclaves in Southern Britain. It’s said the Romano-British leadership hired Jute warriors, from what is now Denmark, as mercenaries to help evict the Picts and Hibernians No surprise the Jutes decided on a major land grab all of their own. They were quickly followed by invasion fleets of Angles and Saxons who swamped the existing Celtic population in an invasion, which began to set the shape of the map of modern Britain. The momentum of this continental invasion was relentless and the Celts were gradually pushed westward and north; essentially off the best, productive farming land on the British Isles and into the mountains. By the 5th Century the Celts and Anglo Saxons were roughly grouped in the areas mapped below.  This map is important. It represents the time of Arthur.

The blue areas are still held by the remnants of those old Iron Age tribes the Romans pacified. The areas in pink mark the extent of the Anglo-Saxon and Jutish invasion.  Lands marked green are those held by warlike Irish Hibernian tribes.

If you look at the Eastern (right hand) side of the map in the blue, Celtic, areas you’ll see the Kingdom of Gododdin. Within that area is marked a place called Din Eidyn; that’s the modern Scots capital of Edinburgh. To the South West the Kingdom of Rheged is referenced, which we now know as England’s beautiful Lake District of England.

For centuries many have maintained that King Arthur is not an historical figure, t that he is just a legend, the ‘once and future King’ that never was. But in our next instalment we hope to find some sparks from the fire of history in ancient Rheged and Gododdin.King Arthur: Pt IIKing Arthur: Pt IIAlun Rees is a freelance journalist and author of bestselling non-fiction titles.

SECRETS OF THE TEMPLES OF STONE

HEAVEN ON EARTH: The Cosmos Described by Singing Stones

Forty-three stones lie at the heart of the world-renowned ‘temple of the ancients’ at Stonehenge. They are called the Bluestones and they were quarried and ‘dressed’ over 4000 years ago in the Preseli Mountains of West Wales, some 199 miles from Stonehenge.   It’s obvious our Neolithic...

THE VOYAGE OF THE BLUESTONES

In the first of this duo of pieces on Stonehenge we discussed why the famous Bluestones held such great spiritual significance they were transported just short of 200 miles from the Preseli Mountains of Wales to Salisbury Plain. Now we’ll talk about the other question thrown up in this great...

A week or so ago a young girl called Matilda Jones was paddling on the edge of a lake on Bodmin Moor in Cornwall when she found a four-foot long sword in the shallows. Unusual in any lake at any time, you might think. But this was no ordinary lake, this was Dozmary Pool, where legend has it the...

Inspired by seven year-old Matilda Jones, who found her very own Excalibur in a fabled Cornish lake (see Part I) Bohemianmojo decided to unravel historical fact from the mountain of fiction surrounding the legend of King Arthur. The popular wisdom on the subject is that there are no historical...

We imagine them clad in shining armour and visored helmets with brightly coloured pennants snapping in the breeze. Mounted on powerful steeds, these famous warriors wielded huge lances and mighty broadswords behind shields decorated with their coats of arms. They would have been an altogether...

For the past three weeks Bohemianmojo has been showcasing our series on King Arthur trying to answer the question; was he a real person or a fable? We believe he was a real, historical figure and to back up our case we’ve presented Bardic poems, the manuscripts of monastic scholars and...