Seventy one per cent of the Earth’s surface is covered by the planet’s constantly restless, tide pulled oceans and Bohemianmojo is totally committed to seeing that enormous power harnessed for our energy needs. We are definitely not fans of inefficient, expensive wind-power or overhyped and polluting solar farms (which also, by the way, kill birds) and we’ve never been shy to say so. However we are now celebrating three significant steps towards the production of wave and tide power off the UK’s coast.

Previously we’ve written about the exciting plans to build a tidal lagoon off the Welsh city of Swansea creating the opportunity to ‘harvest’ the tide for power four times a day. Great news this week then that the group behind it, Tidal Lagoon Power, has announced a done deal to sell electricity to the National Grid from a second, similar but larger, scheme they hope to construct off the Welsh capital Cardiff.

Meanwhile in the furious tidal race of the Pentland Firth, between the extreme northern tip of Scotland and the island of Orkney, another milestone has been reached with just two undersea turbines producing enough electricity for 2000 houses and busting a world record for tidal power generation. The Meygen project run by Atlantis Resources will build up to an array of 269 turbines, bringing its capacity to 398MW, which is enough electricity to power 175,000 homes and a significant percentage of Scotland’s power needs.

Perhaps even more exciting in some ways is the news from a ‘on the surface’ wave power harnessing project also off the coast of Orkney. Run by the European Marine Energy Centre (EMEC) it has produced the world’s first ever tide-powered hydrogen, using an electrolyser. So what you may ask. Well, many engineers dream of a hydrogen society as the ultimate green way of living. Hydrogen fuel cells burn no carbon and the only ‘waste’ they produce is water. Imagine a car with water dripping out of its exhaust instead of noxious fumes and carbon.

Hydrogen is all around us so you might wonder why we haven’t tapped into this wonder fuel. The truth is it’s very hard and very expensive to capture. Efficient hydrogen capture would easily change the way we power our society and the fact that this might be possible through the endless movement of the oceans is exciting indeed.

Well, we’re excited but the UK government doesn’t appear to be. They keep kicking the tidal lagoon project at Swansea into the long grass and despite its steep downward cost curve the Meygen project has been refused access to government renewable funds. 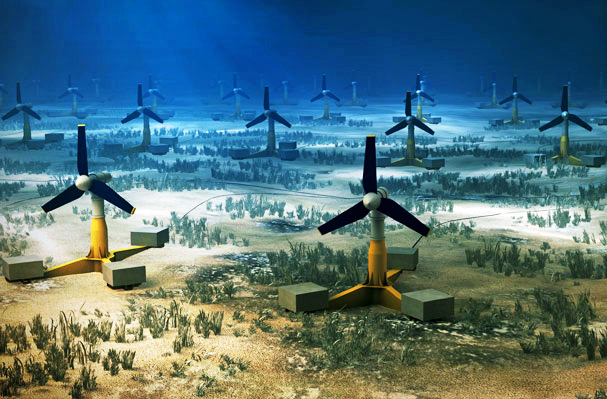 The reason is simple. Offshore wind power has dropped its cost by 50% and that is seen as the future for UK renewable energy. Maybe but we don’t think so. That cost benefit has been the result of economies of scale as huge arrays of giant wind turbines are springing up, particularly on the North Sea coast of the UK.

Billions upon billions of pounds in government subsidies have been poured into this hugely inefficient and expensive technology. But it’s paying off with cheaper energy you may say. Well is it? With something north of £20 billion having already been poured into wind power by subsidy it’s our view that the recent drop in the price is not a real saving at all. The fact is that we, the consumers, have already paid for it up front. And what happens in twenty years time when the huge turbines will need replacing. I think we’ll find then that it’s not a cheap form of power at all; anything but.

That short shelf life damns wind power but the government found it convenient to back it so that they could meet international climate change targets. In doing so they have painted themselves into a corner and there’s no cash left to back the exciting possibilities of tidal power.

It’s a crying shame because wind turbines are extremely expensive, don’t even work if it’s too windy and they kill birds; all for an operating life of only 25 years maximum. By comparison tidal lagoons have an operating life of at least 150 years, probably a lot longer and their only impact on the environment is to create habitat for birds, marine mammals and ocean life.

So when those upfront costs are paid off in the lifetimes of a couple of turbines the lagoon keeps on delivering what becomes relatively cheap and extremely green electricity. That’s because tidal power has a high energy density with moving water storing a larger amount of energy than any other forms of renewable, such as wind. Tidal energy is created by the pull of the moon on the sea making it an inexhaustible energy source of electricity and an entirely predictable one. Tidal Lagoon Power have released a brilliant video of their planned Swansea project outlining the exciting possibilities of lagoons.

Bohemianmojo hope the government will see sense and back these tidal power projects. They should give them the go ahead opening the way for arrays of tidal lagoons and submarine turbines around the UK coast, which is blessed with some of the highest tides on Earth. While the UK government pours money into the short-term fix of wind power the strategically important and very green tidal power sector is left waiting on the sidelines as ministers dither. We say get a move on. Time and tide wait for no man