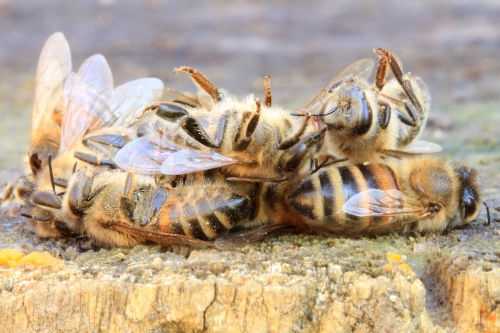 Bee populations crashed and for a while the giant agro-chemical companies were able to dodge the bullet on the causes. But it soon became evident the collapse in hive populations was down to the powerful neo-nic generation of pesticides. Most research showed the neo-nics weren’t directly killing bees but weakening their immune system so they were vulnerable to the varroa mite, which then decimated hives. It appears the effect of the neo-nics also disorientated individual bees so these great navigators of orchards and meadows lost their sense of direction.

Bohemianmojo predicted that rather than withdraw this destructive pesticide the agro-chemical giants would do what they like to do best and that’s to genetically modify their victims; the bees. After all they create GM crops, which are specifically bred to be resistant to herbicides like glyphosate. Sure enough the work to create GM bees with resistance to pesticides and natural pathogens is underway at dozens of research centres from Georgia in the US to Dusseldorf in Germany.

An academic consortium of 100 institutions decoded honeybee DNA in 2006 and since then the direction has only been one way and that’s to change the bees not the pesticides. True there was a turning point recently when the EU banned neo-nics but it all may be too late with varroa infestations epidemic.

While traditional beekeepers stand back and watch all this in horror and despair, the GM Bee industry is still searching for its Holy Grail, the creation of transgenic queens which have useful traits from two or more strains genetically implanted thus swiftly creating hives of GM bees. But they’ve got a problem. Scientists have been achieving transgenic species with other insects for decades but the bee is proving to be a much more difficult subject. We know the hive intelligence is a wonder of nature and sure enough when eggs have been genetically tampered with and then returned to the cells they were taken from worker bees sense something isn’t right, remove them and throw them out of the hive.

There has been a much-lauded success with producing ‘glowing’ bees implanted with the lux bioluminescence gene so that one wonders if science wants to get the poor, industrious bees working night shifts too. Okay, we know, any attempts at humour in such circumstances inevitably fall flat.

A Bohemianmojo we see this honeybee tragedy and the response by science as part of the continuing movement to create a singularly GM environment. Seeds, plants, sheep and cows all of them have been subjected to genetic engineering. Now it’s the turn of the venerated, magical bee. It’s the industrious nature of the bee that holds all of the other creatures in the bio-scape, including humanity, together by pollinating our baseline food sources.

And finally let’s look at the case histories of giant agrochemical and GM companies such as Monsanto. They have always put their major efforts into ruthlessly cornering markets and monopolising the sources of farmers’ inputs, be it seed or pesticide. To do this they use a two-pronged strategy. First their scientists genetically link seeds to chemicals and then the lawyers deploy a raft of copyrights to force the use of their products alone. It’s entirely possible that one day soon we will see the ultimate affront of lawyers from Monsanto filing copyrights on bees. Shame on us if we let it happen.