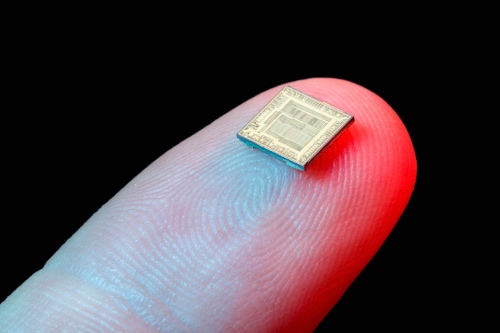 Of course, the workers all ‘volunteered’ to have the subcutaneous implants but then they would wouldn’t they, assuming they want to keep their jobs or avoid a black mark from their bosses.  The Wisconsin company offered the reassurance that none of the chips have GPS trackers or other insidious capabilities and they are FDA approved. Well that’s okay then isn’t it? Oh, and they spent the day they implanted their workers in celebratory mood with a ‘Chip Party.’ Bohemianmojo think they should have called it a ‘Thin End of the Wedge Party.’

A poll by YouGov in the UK suggested one in 10 businesses would consider chipping employees within the next decade while 70% of people say they’d refuse to be chipped with a third of them saying they’d resign on the spot. In any event other companies are following suit and we’ve no doubt the practice will inevitably snowball.  Unusually for us at Bohemianmojo we find ourselves agreeing, well sort of, with a Christian minister in Iowa who quoted Revelation 13:16, and declared microchips in humans to be the ‘Mark of the Beast’. Considering they were first used to ID lost dogs that’s not so far out.
You might think the problems with this technology are obvious. It’s only a matter of time before they are, indeed, fitted with GPS and companies will be able to monitor how long you take on restroom breaks and compare the relative efficiency of workers. They may also carry medical records, psychological profiling, sexual orientation, your DNA, finger and corneal prints too and, who knows, criminal records and political affiliations as well.The ethical and legal implications, even at this level are huge. In a previous article we talked about the faux debate over the ethics of owning a pet. This issue dwarfs such arguments with an Orwellian vision of ‘chipping’ spilling out of businesses into the general population. Will infants be chipped at birth some time in the not so distant future on spurious health grounds?  Will corporations and governments end up owning individuals’ virtual souls? Micro-chipping of humans, even on a business scale, will certainly spell the death of privacy.

But Bohemianmojo sees an even more chilling cultural spectre on the horizon. It’s quickly dawning on the public that the next social upheaval, hard on the heels of the digital explosion, will be the rapid, all encompasssing spread of so-called Artificial Intelligence. AI will be upon us in the coming decades and we are being told by experts that nothing can hold it back. Essentially AI, also scarily known as Machine Intelligence, is the science of advanced and all pervading robotics. Professor Stephen Hawking doesn’t mince his words. He thinks it spells the end of mankind.
Bohemianmojo doesn’t claim be clever enough to debate that but we do see the possibility of an awful synergy between micro-chipping of the population and AI. We can quite easily envisage people being linked up to robotics through implants, first the micro-chip in your arm, and then who knows something more sophisticated plumbed directly into the human brain?  We can see a time when it will be impossible to tell what is robot and what is human. One thing’s for certain we absolutely abhor the thought of that living nightmare and we hope humankind will fight these moves by unfettered, unethical science. If we don’t stop this then maybe it’s time to get that cabin on the side of a mountain where the track runs out.