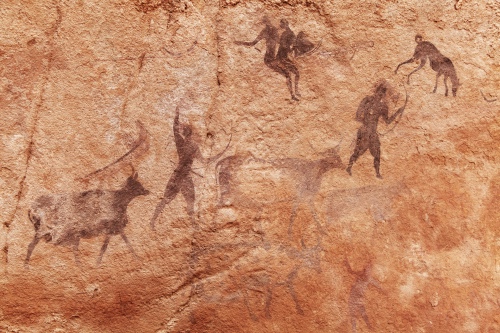 Bohemianmojo has been excited by research news from Duke University, North Carolina where a team led by Jennifer Groh have established that our eardrums coordinate with the direction our eyes are looking. Not earthshattering quantum stuff perhaps but confirmation, if confirmation were needed, that humans evolved as predators. Canine teeth and forward facing eyes already mark mankind out in that bracket.

Deafening my eardrums (currently facing forward) to the potential howls of protest from vegans I repeat, as a species we were born to hunt and devour meat. Okay, there are geographical and climatic variants where it’s possible to consume more vegetables and fruit. One of those is not the Arctic Circle where Inuit clans evolved to eat an almost exclusively carnivorous diet. But even in the balmy climes of the South Pacific, where it’s possible to eat less meat than at other latitudes, islanders risk their lives on the deep ocean to harvest fish and in most backyards you’ll find a pig fattening.

At Bohemianmojo we do not criticise those who choose a diet which can be accommodated by the resources available to them. Vegetarian, pescatarian, vegan; be whatever you want to be. However we also stand up for the rights of the majority who wish to go with the evolutionary truth that we are omnivores who actively seek out meat. At Bohemianmojo we are unashamedly hunter-gatherer.

But there are caveats, of course. As a society we have largely relinquished the hunting part of the food equation to industrialised farming. So we have a duty, wherever possible, to ensure that the meat we acquire is sourced from well husbanded, grass grazed and ethically slaughtered animals. At the same time we feel the vegan community has to fess up too and admit they could not sustain their way of life without specialist food marts and the supplement industry.

There’s a fuller report on the Duke University research in the UK’s New Scientist magazine (July 29th edition) It also highlights research from Princeton University where they’ve identified a ‘sociable’ gene, present in some wolves, which allowed mankind to domesticate these ‘friendlier’ canines.

Previously we’ve read of research suggesting that mankind developed advanced speech when we teamed up with dogs. Hominids had large, exaggerated foreheads to accommodate an enlarged part of the brain used to process scent for hunting. When we teamed up with dogs, that did our scenting work for us, we didn’t need that big frontal lobe and that allowed our palate to rise and speech to develop.  Crucially archaeologists have found no evidence Neanderthals kept dogs and we all know what happened to them.  Truly then dogs are man’s best friends and guess what; their ears follow their eyes too.