England’s Lake District is a magnificent landscape. Sharp edged mountains glower over fairy-tale dales and heather clad fells. It has enthralled some of the country’s greatest poets, painters and writers for centuries.The dales are dotted with neat, stone farmsteads placed on a graph of pristine dry-stone walls enclosing small home pastures.

They contain a unique community of shepherding and hill farming folk. The fells and mountainsides above provide grazing for their traditional flocks of smoky grey Herdwick sheep. Beatrix Potter is the writer most associated with this special heritage so when Bohemian Mojo travelled to the Lake District a visit to her home at Hill Top seemed more than appropriate.

The Lake District is always worth a visit in its own right but I was also interested in the ‘rewilding’ debate, which has become quite heated in the UK lately and centres on ‘The Lakes’. It’s one of the areas being sized up by the rewilding lobby for biologically engineering the local wildlife with the re- introduction of long extinct species. They want to take the sheep off the tops so that the forests they say once cloaked the mountains will grow again to provide habitat for wild boar, beaver, lynx and wolves.

Rewilding is an idea that first emerged in the USA and has been successful in areas like Yellowstone and the Yukon. These are big tracts of wilderness land with a relatively small human interface. I can see how rewilding might work in those landscapes

But here in the UK true wilderness doesn’t exist until you reach the north of Scotland. And the interaction between mankind and the natural world is tightly laced and in many ways more claustrophobic and complex.

Yet the argument for rewilding is being pushed hard by media savvy, naturalists. A plan has been put forward to release lynx on three private estates in Norfolk, Cumbria and Aberdeenshire. Given the government green light those private schemes would lead to demands to reforest uplands where the public presently has the hard won, right to roam.

What would Beatrix have thought about it all? When we arrived at her old  house I fell into an interesting conversation on the subject with a local.

"I’m sure she would have been very upset at the idea just like local folk are today," said the woman, "She cherished the unique lifestyle and community of the Lakes and the wildlife that has evolved alongside hill farming. Just look at what she did in her life.

Good point. Beatrix is most famous for her wonderful children’s books and her legacy of Peter Rabbit and the other characters have delighted countless children across the world.

But she was a true polymath. She was as fine a naturalist as any today cataloguing and illustrating the wild animals, invertebrates and plant life of the Lakes. She was particularly expert about fungi.

Beatrix also took a keen interest in what was, at the time, the relatively young science of geology and kept a collection of fossils. Archaeology was another a passion and she took part in a dig on a Roman fort near Ambleside in the Lake District.

A self-taught agriculturist Beatrix Potter became the pivotal figure in saving the threatened Lakeland sheep breed; the Herdwick. If that wasn’t enough she also played a key role in establishing the National Trust buying land to preserve the Lakeland way of life; the upland farming way. 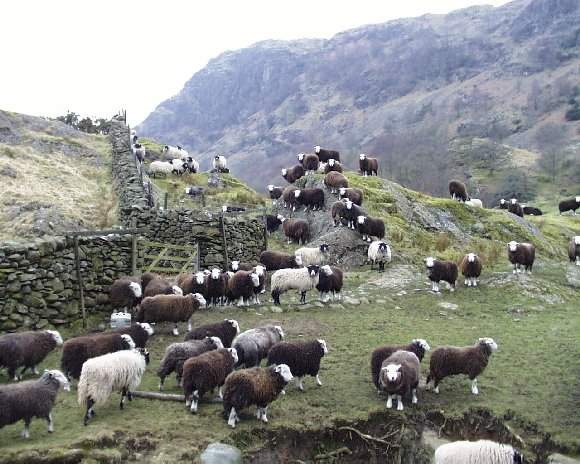 That’s a prestigious legacy from a wonderful woman and as I’ve listened to the debate unfold I’m convinced she would have said of rewilding the Lake District ‘Wrong time, wrong place.”

I don't think she would have liked the balance of the debate either. On one side of the argument there are well known media naturalists with instant access to television slots and leader page articles in newspapers.

On the other hill farmers and shepherds who have stock to feed and care for, upland weather to deal with and a mountain of bureaucratic form filling too. They don’t have easy access to the media or the large demographic that makes society sit up and listen to their views.

The rewilders brand their opponents insiduous but they have themselves insiduosly turned the argument to put those hard pressed farmers on the back foot and make them have to defend the grazing regime that has been in place for thousands of years.

I think Beatrix would have pointed out it's for those who want to make such traumatic changes justify their every word.  And I think she would have had some pressing questions of those who propose rewilding the Lakes. How far back do they want to rewind for instance? The proposals I’ve read seem to want to rewind the Lake District 12,000 years to the end of the last Ice Age.

It’s a time when brown bear, beaver, wild boar, lynx and wolves roamed the primeval forest covering much of the island. Is that really appropriate? But aren’t they conveniently ignoring the fact that areas like the Lake District, Dartmoor, Exmoor and the uplands of Wales, have been farmed and grazed since the Bronze Age?

The Lake District has evolved at the hand of man over several thousand years. Rewilding, almost by definition, requires the absence of man. The lynx, it seems, is more important than the upland farming family. Isn’t this a case of lynx for lynx sake?

If there is a hidden argument about human poplulation levels being too high, arguments I've heard from rewilding enthusiasts, then let the leaders of the movement come out plainly and say so. Let's have a democratic debate about that. 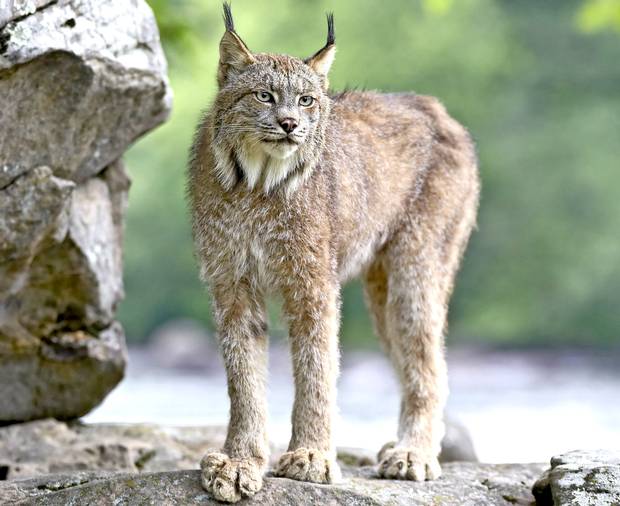 They also seem to forward their own views as indisputable. Allowing the mountain tops to be re-clothed with forest would, they say, help prevent the flooding caused by sheep grazing.

I’m quite cynical about the opinions of rewilders when it comes to flooding. It was the views of rewilders, many of them entrenched within the government's Environment Agency, which led to a flooding catastrophe in another iconic British landscape; the Somerset Levels near Glastonbury.

The farming community of Somerset repeatedly warned that a failure to maintain the flood defences in favour of multi milion pound rewilding projects would lead to disaster. They were mocked as ignorant by the naturalists of the rewilding lobby but the farmers were right. Villages and communities across the Levels had to pay the price when the entire area was inundated. It’s wise not talk about rewilding in the Somerset Levels. Hackles rise.

Militant rewilders have failed to heed the lessons of their own hubris and continue the campaign to re-engineer the biology of the Lake District and other areas. I’ve read some patronising and platitudinous statements from leading rewilders on the lines of ‘winning farmers over’ and ‘making room for them’ in the newly reforested hills of the Lakes.

Very generous when what is proposed may well destroy a way of life and an ancient heritage. Beatrix Potter understood that heritage and used her considerable wealth to buy upland farms so the families who worked them could stay on and preserve their community.

There is also a very real fear if the rewilding fraternity get their way they will create their own naturalists’ playgrounds at the expense of the free access the rest of us enjoy to the uplands. The fact is  most wildlife charities become proprietary and exclusive about the tracts of land under their control.

How long would it be before rewilders start to close down access to mountain sides and fells where ramblers, runners, climbers, horse riders and mountain bikers enjoy free access at the moment? Lynx pose no threat to humans but I imagine the reason advanced for closing access to the hills would be to protect lynx from human interference.

Rewilding in the UK would lead to a new elite in the countryside. The tweed clad Victorian landowners, who kept the ‘common folk’ off their moors and out of their forests, will be replaced by a new aristocracy of rewilders, in their trademark technical outdoor gear.

They'll appoint themselves the new rural privileged class; all publicly funded. They're the one's who'll have back stage passes; access all areas. The rest of us will be confined to fenced-in paths and strictly controlled viewing platforms. By implication rewilders don’t like humans in the conservation equation. Unless, I suspect, it’s themselves.

Yes, rewilding works in the awesome geology of Yellowstone where the protection and re-introduction of the wolf has lifted the spirit. Yes, Scotland may have the space to accommodate a rewilding project but south of the border things are different. The Lake District lies shoulder to shoulder with the big conurbations of Manchester, Liverpool and metropolitan Yorkshire. It's a similar story for Dartmoor, Exmoor, Snowdonia and the Brecon Beacons.

They are reservoirs of open space, fresh air and big vistas that give the populations of the cities access to the outdoors. They are too precious to be meddled with by a self appointed elite who brand those who oppose them ‘noxious, ludicrous and insidious.’ 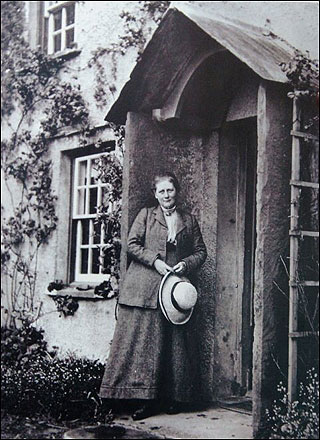 Beatrix Potter didn’t think like that. She loved nature but she also loved people in community. She went out of her way to protect the way of life of the upland farmers of the Lake District.

As an amateur archaeologist she recognised the hand of mankind over many thousands of years in the unique landscape she loved. As a committed naturalist she wanted the farmer to live in harmony with the wildlife of the Lake District.

The truth is that lynx vanished from the British landscape 1300 years ago. These days it's the hill farmers of Britain who are the truly endangered species. They farm in traditional, sustainable ways. They farm carefully and mindfully and they farm with integrity. They farm to survive.

They live a life a world a way from the big agri-businesses of more hospitable and productive agricultural landscapes. They are an object lesson in living in community.

They are here. They are present and they don’t have to be re-introduced. Why should their lives be disrupted by a land grab to create habitats for long lost species. The farmers deserved and got Beatrix Potter’s unreserved support and they deserve our support too.