We were headed to a place called Caerleon, which apparently means “Fortress of the Legions” in Welsh. Caerleon is an important archeological site, riddled with layers upon layers of human history; a point which only truly dawned on me once we arrived and I saw how beautifully the community and landscape merged and grew, up, around, and out of the varying relics of the past.

Today we’ve come to see the Roman fortress, baths, and amphitheater as well as feel into the landscape that was once the tribal territory of the fierce Silures. As we wind through the valley and into the town, Alun points out the unmistakable slope of an Iron Age Hill Fort. It occurs to me that Caerleon is a physical representation of the liminal, each era blending seamlessly into the next right through to today.

Our first stop is the baths, which are an amazement to behold. The bold stone formations are awash with the soft sounds of lapping water, lighting, and imagery that gently guide the imagination back through the eons.

This was a state of the art bathing facility with a frigidarium, tepidarium, caldarium and natatio, otherwise known as a cold-water room, a warm-water room, a hot-water room, and open air swimming pool.  There were covered exercise rooms and heated dressing rooms, all beautifully decorated with elaborately tiled walls and terraces. 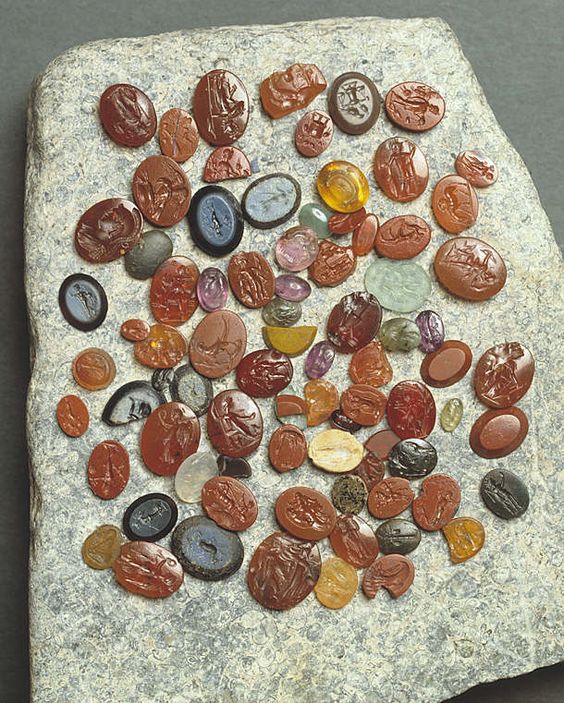 Running my fingers across the tiled walls, I couldn’t help but feel a bit awed that this ornamentation and these stone walkways have been here for about 2000 years. Whose footprints am I treading in? How many fingertips over the years have trailed this same etched design?

Further down the walkway, I was immediately reminded that some things throughout history do not change. One of my first jobs was as pool lifeguard, I quickly learned that a favorite activity at the end of the day was to dive down to the drains and see what had collected there.

Coins, watches, jewelry all matter of items loosened from swimmers as they frolicked in the water. The Roman baths were no different. So off we headed the Caerleon museum to marvel at the jewels and coins that had been retrieved by archeologists from the drains of these ancient baths.

We were impressed by the collection of precious and semi-precious stones fallen from jewelry or talismans, some as small as little fingernail, yet intricately carved with figures of deities and other symbolic representations. The designs ran the gamut from gods and goddesses to everyday icons. There was even one with a tiny, perfectly carved pack donkey; beloved companion? Or perhaps tongue in cheek commentary on someone’s social status? After much oohing and aahing, we continued on the final leg of our journey, Caerleon Amphitheatre.

To be honest, I was quite excited about seeing the amphitheater and felt it would be the highlight of our adventure. I absolutely love outdoor theater, having watched many of my brother’s productions on warm summer nights in the Red Rock Valley in the US. As we turned down the lane, Alun pointed out the area where archeologists had recently uncovered the equivalent of a theater snackbar.

Apparently, vendors set up shop outside the amphitheater hawking their wares, attendees could purchase delicacies like oysters and lamb cutlets to enjoy during the show. That sure beats today’s option of stale popcorn. 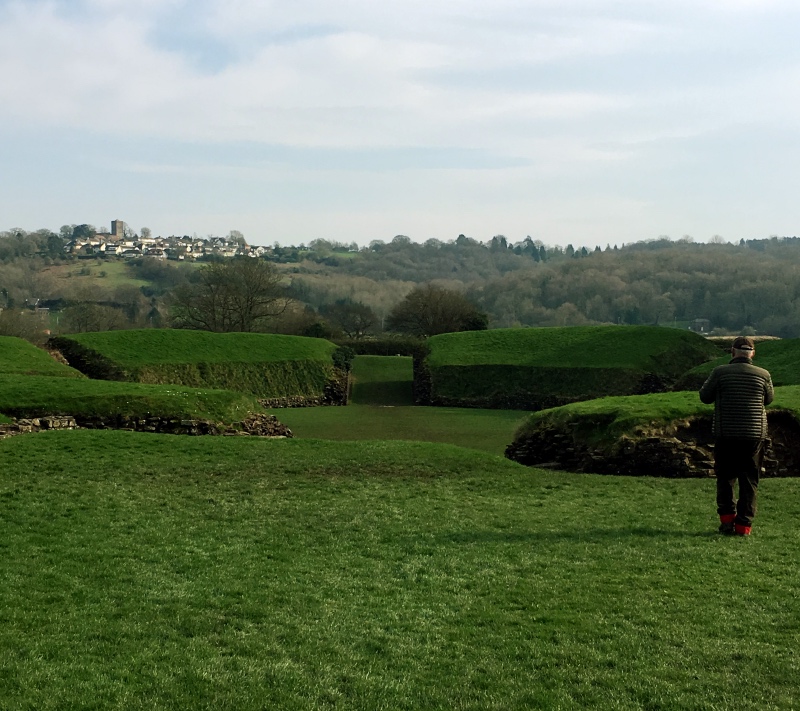 We parked and began walking toward the rolling green fields that were the upper edges of the amphitheater when suddenly it hit me. The reality of what a Roman amphitheater really was, landed hard and heavy in the pit of my stomach.

Suddenly, the landscape took on an entirely different timbre as my mind grasped hold of the events that would have really occurred here within these grassy walls. Gladiators fighting to the death, slaves pitted against wild animals, any number of other horrifying ‘events’ couched as entertainment. As my gaze wandered over the imposing walls and what would have been the seating area, images of crowds, cheering and jeering, filled my mind. A sobering reflection.

We wandered a little further, encountering locals here and there all willing to share tidbits of history with us as we stopped and chatted. The somber feeling never quite left me and as the sun began to wester we decided it was time to wind our way back towards Wiltshire. Heavy with thoughts, I realized I love history, even the horrible bits. There’s something about knowing the capacity of humanity that inspires me to be a better, kinder human.

I highly recommend a visit to Caerleon if you’re in the area, or anywhere else that is rich with the stories of the past.