Bohemian Mojo were in Wales again, exploring the bounty of the coast, for our last blog.  We were staying at our favourite Monk Haven B&B in Pembrokeshire.

It was breakfast time and we were enjoying the laver bread delicacy which had been cooked with our bacon and eggs. At least I was enjoying it. Not so sure about Stephanie. (Food From The Foreshore)Then our friend Joanne Evans mentioned she was going ‘winkling’ with her family later on. Winkling indeed. At first Stephanie looked blank until I explained winkles, more properly called periwinkles, are gathered on the rocky foreshore.

Her eyes lit-up at this. Stephanie is always ready for a foraging adventure and this one had the added spice of being below the tideline. 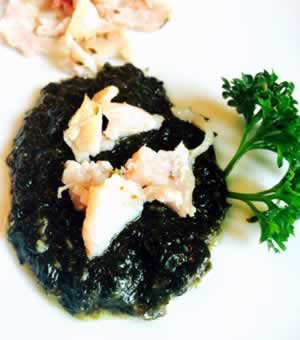 So we cheekily asked if we could come along. Joanne was great about it and told us to meet her later in the beautiful harbour at Solva about forty minutes drive on the way to the tiny Cathedral city of St. David’s. 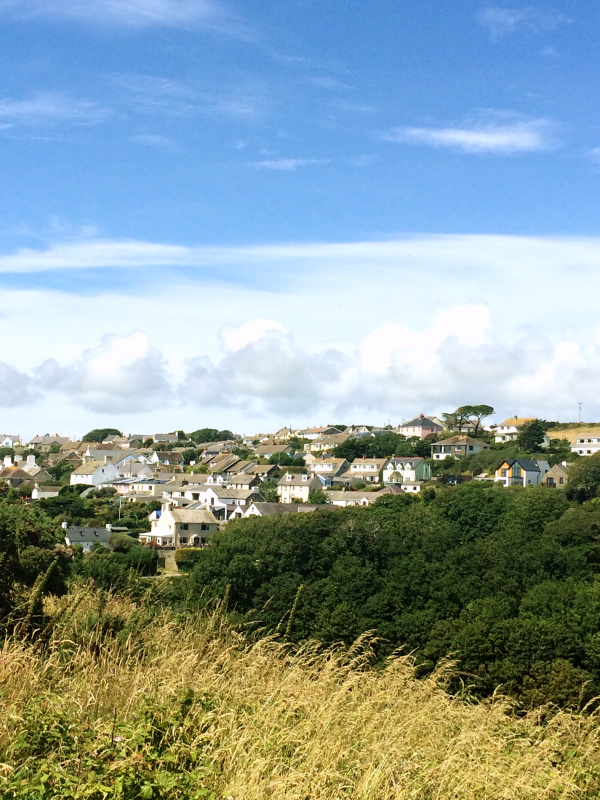 Solva is simply wonderful. It’s a tiny fishing village which nestles in the steep sided valley formed by melt water at the end of the ice age. A little stream cascades down the valley before spilling out in a mini estuary at low tide. We arrived early and walked along the spectacular ridge to the east of the harbour looking down on a twin valley, which holds the church of St. Elvis no less, ending in a jewel of a pebble peach.

The tide was out so we strolled back to explore the harbour where we were supposed to meet Joanne.

Having set the scene perhaps I should describe the object of the exercise. Winkles. 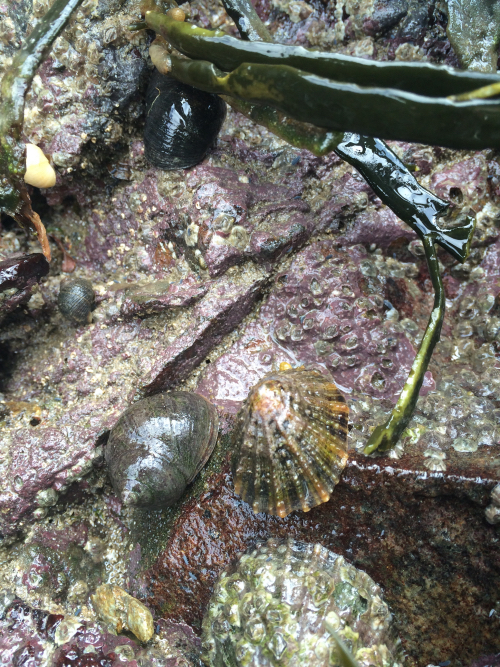 Winkles are a tiny shellfish which is their major disadvantage as a food source but on the pro side of things they are extremely tasty and our hunter gatherer ancestors ate prodigious numbers of them.

They have a dark brown to blue shell and inside is a creature packed with good stuff. Collecting them is easy enough but, as always in this liminal world, pay great respect and attention to the tide. Another thing which goes for all shellfish. Only harvest them in areas of clean water; places like Solva where the sea is pristine. 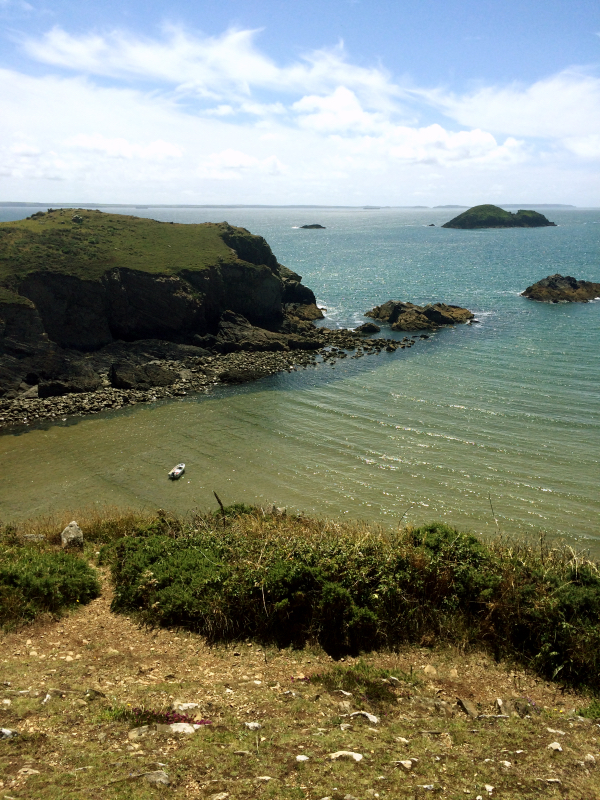 With all this in mind we headed out to the tideline but we couldn’t find Joanne and her family. All we found was a particularly grumpy boat owner who made hello sound like an insult. Turns out Joanne was there on the other side of the stream but we didn’t spot her.

Winkles can be found in rock pools, in clusters along rocky crevices and simply by lifting up the seaweed. We found plenty along the rocky edge of the estuary but they live in sand too. Incredibly marine zoologists have found them burrowed a hundred feet and more in sand.

We found plenty but here’s a sad, sad confession. We were hoping to meet up with Joanne and her team so we didn’t take a bucket to collect them in. Next time we’ll be better prepared and give you a full run down on the winkle experience.

Scotland is winkle central and there they collect them by the tonne to export to the continent and the Far East. Don’t worry it’s entirely sustainable and there’s no danger to the population. At least not while it’s a local, cottage industry. 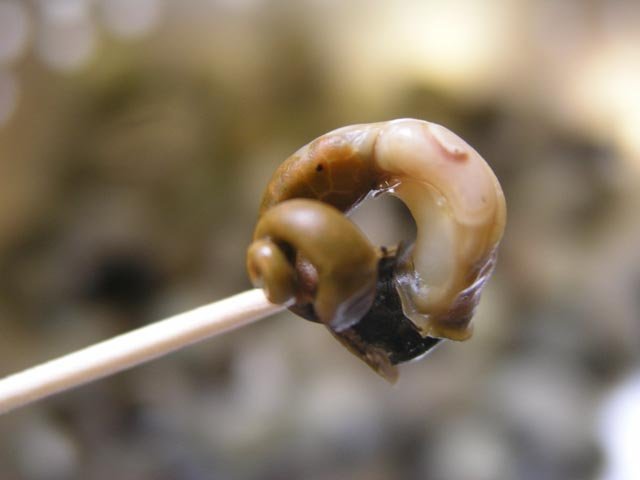 In the UK and Ireland they’re mostly eaten on the Celtic seaboard of the Atlantic; Ireland, Scotland and Wales. To prepare them you have to soak them and wash them in lots of cold water. They are boiled for three or four minutes and then they’re ready to eat. But only if you’ve got a pin to literally winkle them out. 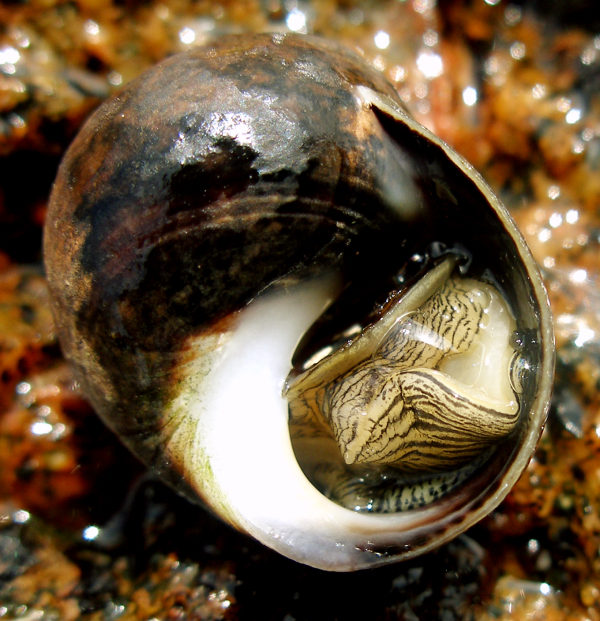 That’s the only drawback. Winkle eating is a fiddly business and you need to give the creature a quick twist on the pin to pull it all out successfully. Well worth it though. Tasty. And high in protein, low in fat and crammed with Omega-3.

It’s also something we Europeans exported to the other side of the Atlantic where the winkle didn’t naturally occur. In the 19th Century it colonised New England from the ballast of ships travelling to the US. 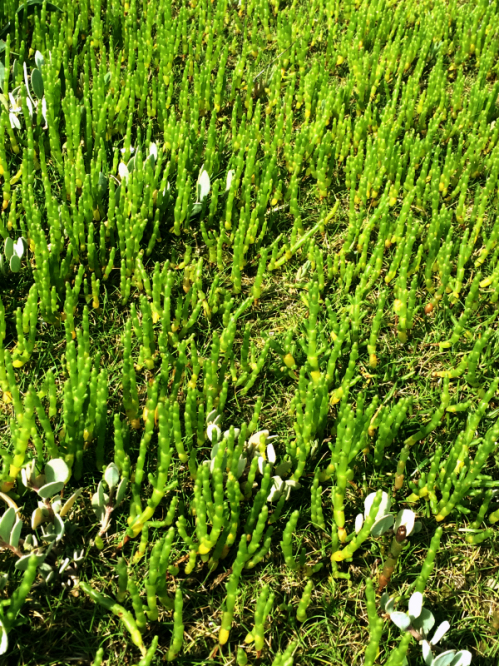 So we left Solva after a wonderful walk and at least Stephanie could get the idea if not the flavor of the day! We drove back in the direction of our B&B to search for another, wonderful tideline bounty. Samphire.

Our friends at the Griffin Inn in Dale had told us where we might find acres of the wonderful tidal herb and we wanted to see for ourselves. We’re not going to reveal the spot as the locals don’t want outsiders coming down and stripping the sea pasture bare for profit.  Samphire sells for £18 a kilo!

A pleasant walk in the fading light of dusk found us fording a stream then turning a corner to find a large salt flat drained of the tide, cut by a maze of channels. 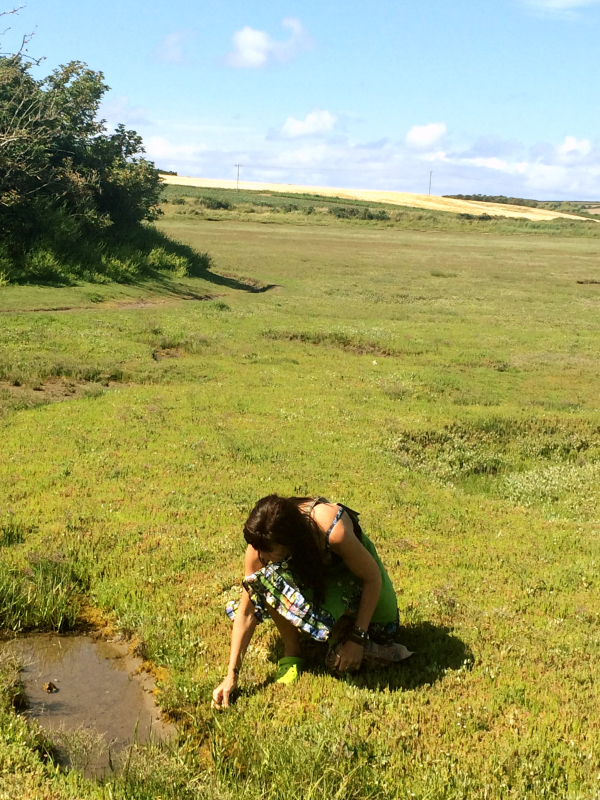 It was blushed green for as far as the eye could see. But only when we looked down at our feet could we see what had water coloured the marsh; it was a host of samphire plants. We just stooped to pick and eat them fresh from the tide as we walked. Wonderful. Simply wonderful.

We’ll be back to Dale and to Solva and I plan to prepare a meal to evoke that wonderful day again. I was thinking winkles in garlic on a bed of samphire. Can’t wait! 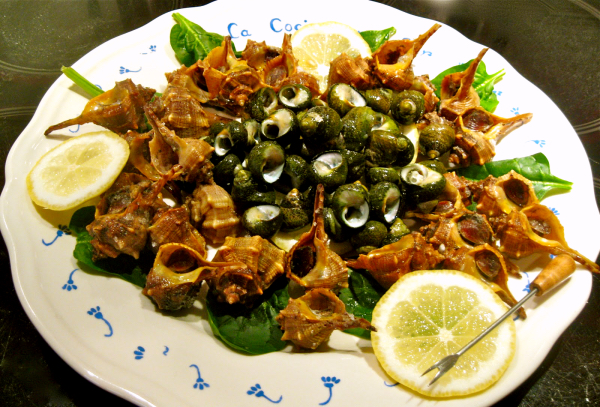