Lord it blew. How it blew!

The gravel hard rain had stopped but the wind was still pushing us here and there as we scurried along the harbour side looking for somewhere to eat. And then the Cornish storm literally pushed us into the doorway of what, at first glance, seemed to be a whitewashed cottage on the quayside. But there was a menu posted in the doorway and, hopeful, we stumbled out of the gale into a hearty welcome. We’d found Outlaw’s Fish Kitchen and we were about to experience an assault on our senses to rival the weather’s blast outside. 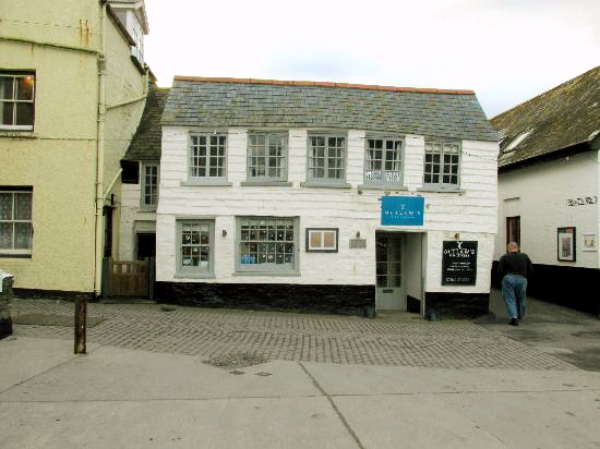 Our adventure had begun earlier that day when Stephanie and I left the chalk hills of Wiltshire and headed south west for Cornwall. It was chucking it down when we left. A storm was forecast and we were heading for the home of wild weather - the rugged coast of North Cornwall. 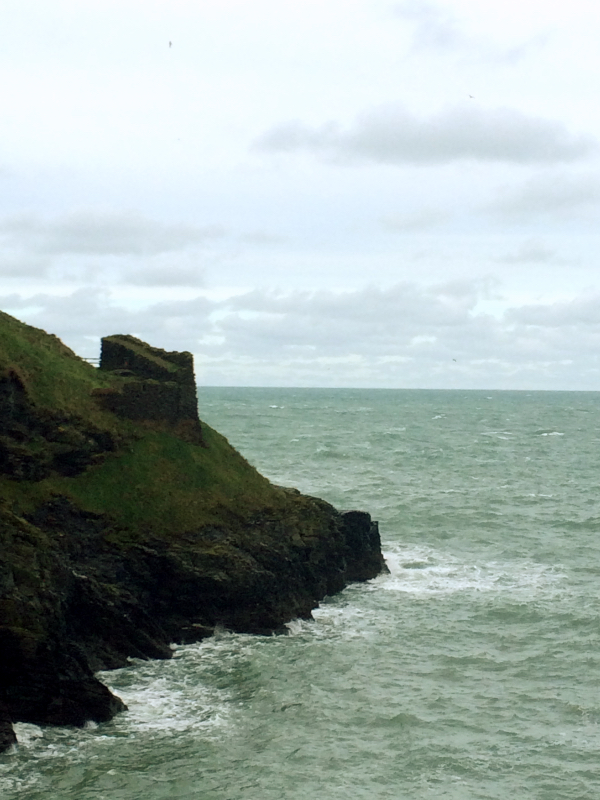 The aim of braving the storm was simple. Stephanie had a powerful hankering to see the impossibly romantic ruins of Tintagel Castle where Cornish tradition places Camelot; home to King Arthur’s court.

Three hours later we were looking over the granite cliff tops onto a boiling sea whipped into a cappuccino froth by 80 mph gusts. We had to push the doors hard to get out of the car to hear the gale strumming on power lines like guitar strings. It grabbed at us too; testing our aerodynamic properties.

It was what the Cornish like to call, in their gentle drawl, ‘a bit of a blow’. In days gone by it would have been just the weather to lure unsuspecting ships onto the rocks by waving “wreckers” lanterns on the cliffs above. 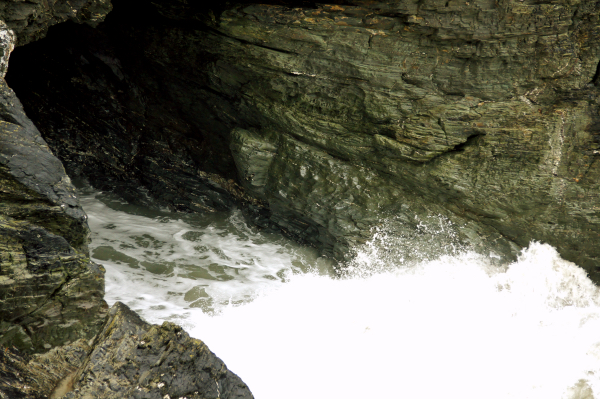 The light was fading fast, it was December after all and Christmas was nearly upon us, so we headed straight for our hotel, the Mill House Inn, nestled in the folds of the cove at Trebarwith Sands.

It might help those who don’t know Cornwall to paint a picture of its implacable but beautiful northern coast.  Staring out over the Atlantic towards America it is a fortress of granite cliffs gashed at intervals by streams that have cut steep, oak filled valleys down to small, sandy coves. 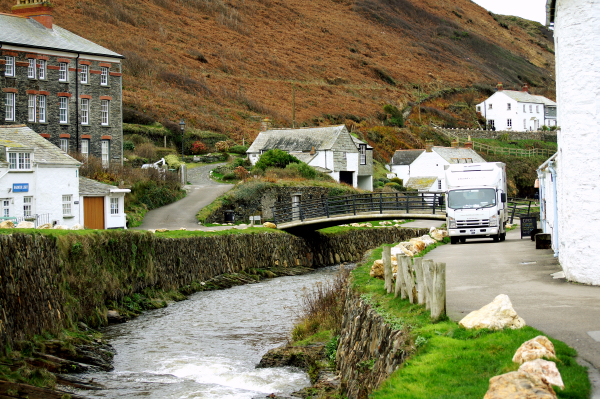 The Mill House sits on one of those streams tumbling towards the sea. It is charming; built with dark, local stone. We hauled our bags into reception and had a first small disappointment.

In front of the check-in desk was a nicely decorated Christmas tree and an open hearth fireplace. But neither was lit. No lights on the tree. No fire flickering warmth in the hearth to welcome travellers from the storm. It’s the little things like that make a difference.

Little did we know more disappointment was to follow but we didn’t settle in to our accommodation, which looked great, immediately instead headed for the shore to witness the storm from close quarters.

And what a storm! Just look at the video clip! It was eye-wateringly awesome. From the cliffs above the cove we watched gigantic waves dash themselves a hundred feet up the granite bulwarks of Cornwall then drag back in mile long undertows. The sea was white with a cream of whipped-up salt and spume from it blew like snow onto the shoreline. Just standing upright took deliberate effort. 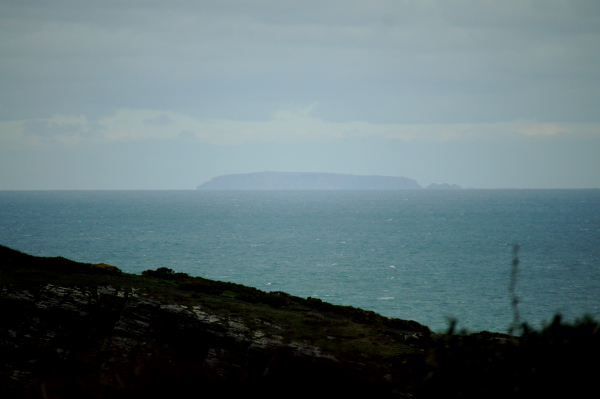 I could only imagine the sensory assault this storm was having on Stephanie who had arrived fresh on the Cornish cliff tops from the kiln-like heat of the Nevada desert. Her whoops of sheer joy and transported delight gave me the answer.

We returned to the Mill House elated but our happiness was short lived. Stephanie had an online conference later that night with colleagues eight hours behind in the USA. But try as she might she couldn’t hook-up to the hotel broadband. 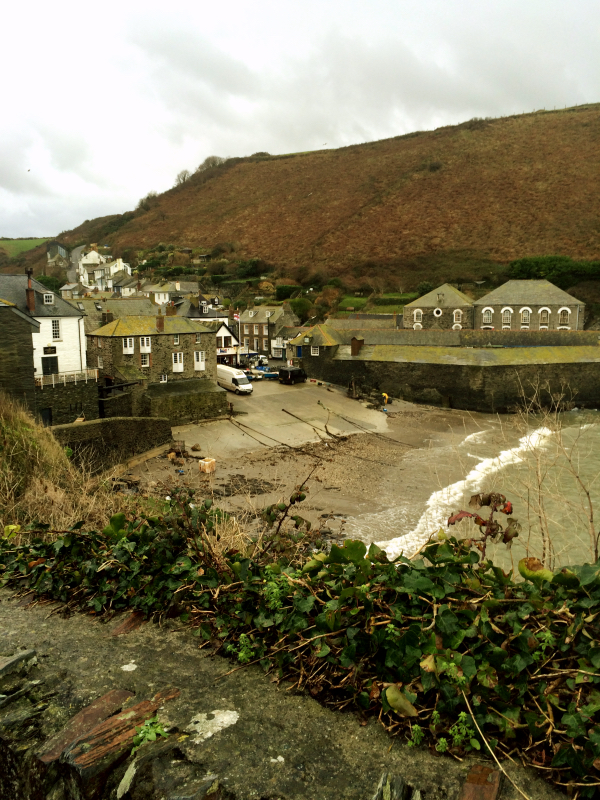 She tried. I tried. The manager tried. The chef had a go too. No joy. There were two WiFi link buts one simply refused to work and apparently they’d never had a code for the other which had a stronger signal. Marvellous!

The upshot was we’d have to move. I started scoping other local hotels until the owner of the Mill House, a typically laid back Cornishman, turned up. He couldn’t get the link working either but immediately made amends by arranging for us to stay at his other hotel, the Slipway, at nearby Port Isaac. Off we went.

Port Isaac is a stunning and quintessentially Cornish fishing harbour famous as the location for the iconic TV series ‘Doc Martin’. The village clusters around the port as if it doesn’t want to miss a moment of the fishermen’s daily drama. 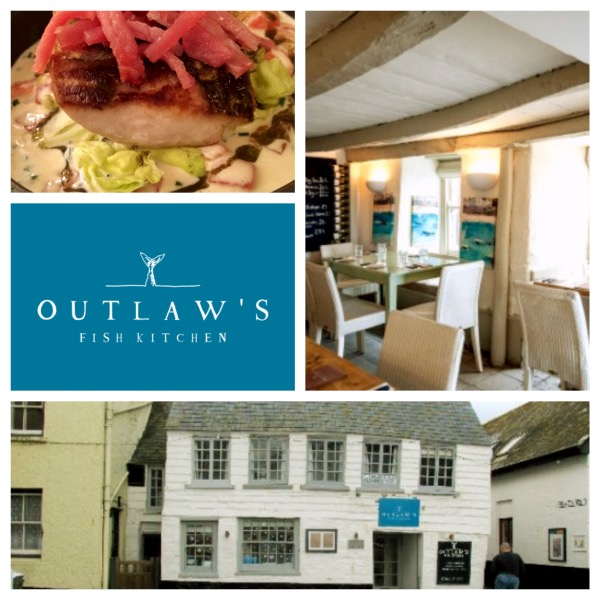 As the name suggests the Slipway is right next to the quay where catches are landed by the admirably sustainable Cornish inshore fishing fleet. Time to eat but we were a little lost. We wanted to get out into the village but it was off season and quite a few local restaurants were closed for winter.

That’s when the storm took a hand and blew us into the doorway of Outlaw’s Fish Kitchen just a few paces from our hotel. And so we stumbled out of the gale into a hearty, storm force welcome. 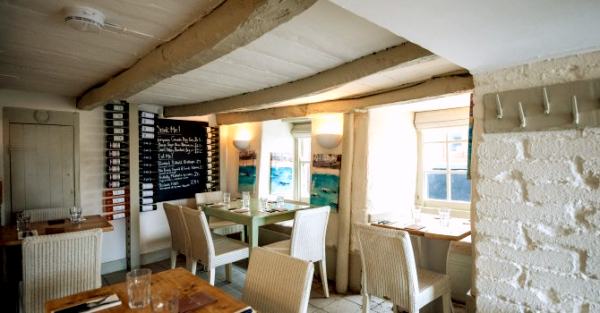 The Fish Kitchen is an intimate place, room for perhaps forty covers, and it plugs the kitchen genius of its owner Nathan Outlaw, one of the UK’s most popular celebrity chefs. There were signed copies of his books in stacks on the shelves, a few pamphlets and photographs too.

It’s worth repeating Outlaw’s stated ethos which is essentially local and sustainable. His menu, he says, “celebrates small, original and delicious seafood plates. Cooked to order and served when ready.” 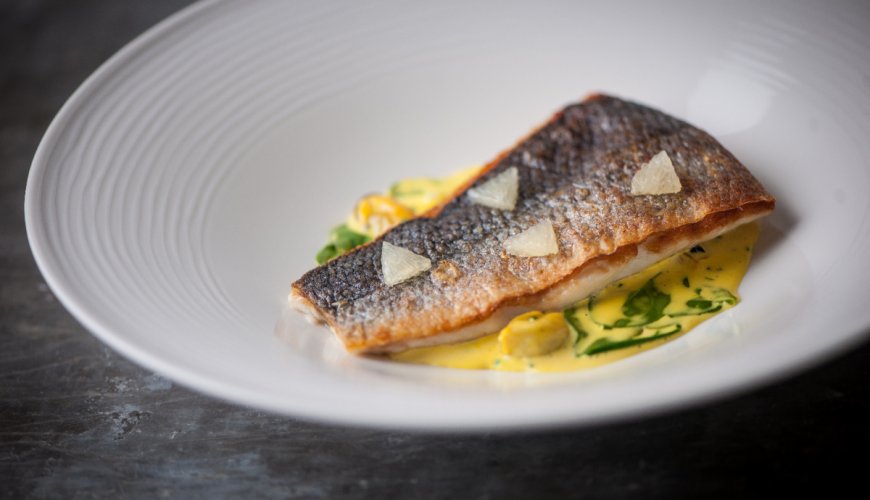 So it’s basically a tapas restaurant.

But the next part of his mission statement is important and laudable: “Wherever possible we buy the best fish from local inshore day boats that are certified by the Responsible Fishing Scheme. We are proud of our local fishermen who land fresh fish and shellfish daily and work using low impact fishing methods that preserve our marine environment.” 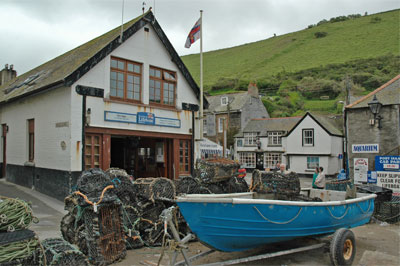 That’s something you come to expect in Cornwall where so many restaurants work on the same principle. Why wouldn’t they with fresh fish on the doorstep, lamb and beef grazing in the hinterland and good vegetable growers behind every hedgerow?

No less worthy for that and deserving a round of applause from Bohemian Mojo. That turned into a resounding cheer when we read about a discretionary £1 donation added to the bill for the Outlaw Fish Kitchen’s next door neighbours: the heroic volunteers of the Port Isaac station of the Royal National Lifeboat Institution. 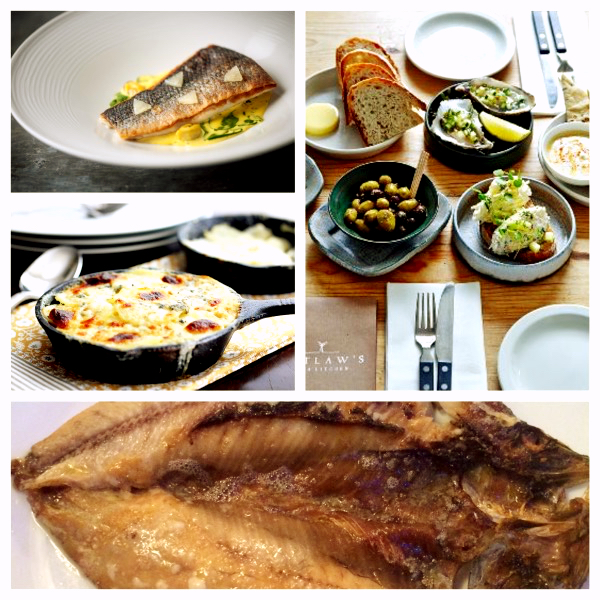 What about the food? Well it was a storm on a plate to match the storm rattling the blinds outside. I will truly never forget his fennel and cheese dish. All the fish plates, and I mean all of them, were sublime.

I do have one point to make and it’s not about the quality of the food. The Fish Kitchen is Nathan Outlaw’s concept. It serves his exclusive recipes, cooked no doubt to his stringent instructions. But, like other celebrity chefs, he has other businesses in his portfolio to juggle. So he wasn’t cooking for us that night.

But whoever was did his boss proud. We hailed our heartfelt thanks through the kitchen door as we left but he was too busy for us to pursue more of an introduction. Why not just name the chefs who are lovingly presenting your dishes as a small tribute, Nathan? That chef certainly deserved it. 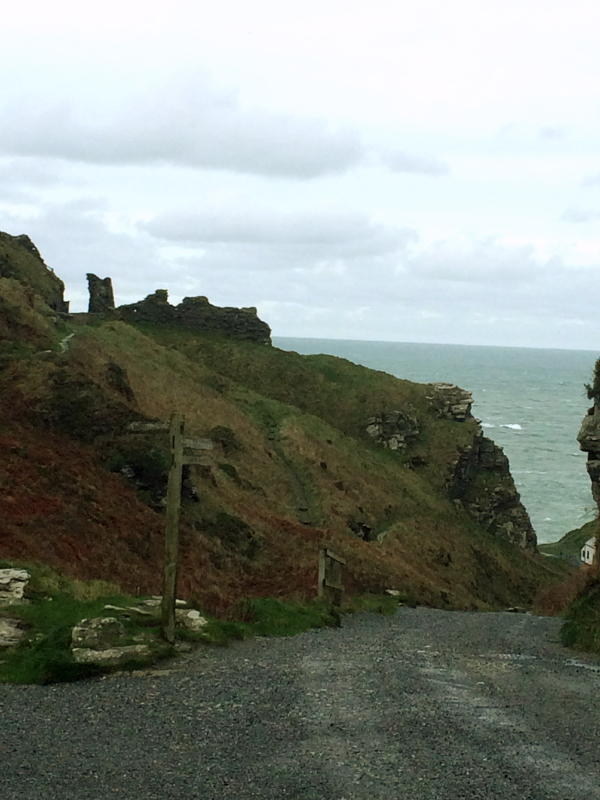 Next day still savouring thoughts of fennel and cheese we headed for Tintagel. It stands dramatically on a small island with a fortified gatehouse on the landward side connected by a bridge.

The Duke of Cornwall built the medieval castle on the legendary site thinking some of the magic of King Arthur would rub off on him and win him favour with the rebellious Cornish.

It’s a magnificent setting but sadly we had to view it from a distance. It was closed for winter! So too was the nearby Witchcraft Museum. 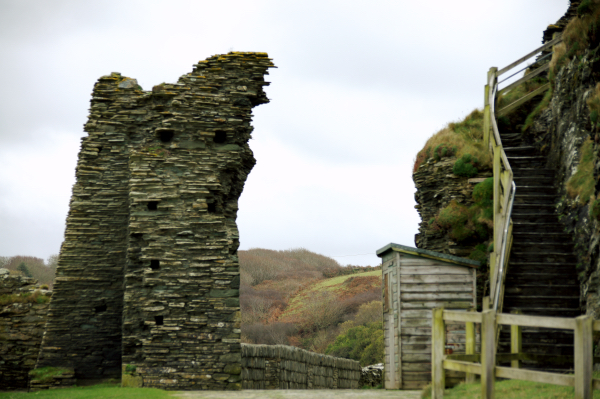 Next stop the fishing village of Boscastle which had one of the closes shaves with natural disaster imaginable.  It happened in the summer of 2004 when a freak rainstorm sent 500 million gallons of water pouring off Bodmin Moor into the narrow valley of Boscastle.

A cascade of trees, boulders and debris smashed the village destroying homes and businesses. Only the unbelievable skill and courage of the helicopter rescue crews from the navy, air force and coastguard prevented a human tragedy.

They queued in the narrow defile to sweep down and rescue over a hundred people from the rooftops. No-one died that day in one of the most remarkable rescues in UK history. 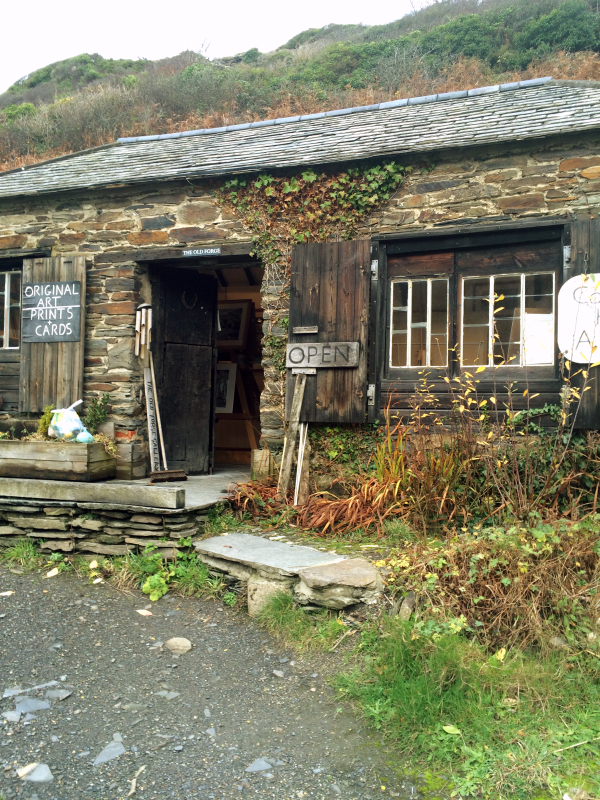 Boscastle rose again out of the mud and wreckage and today it’s a vibrant home to arts and crafts with a wonderful visitor centre. It’s a testament to the resilience and endeavour of Cornish folk.

Bohemian Mojo will return one day soon and we hope to find Tintagel and the Witchcraft Museum open! Lunch at the Fishing Kitchen will be a must.

In the months to come we’ll also be taking a look at the sustainable inshore fishermen of Cornwall and the mussel beds owned by Prince Charles.  We’ll take a look at the wonderful Bronze Age stone circles on the Cornish moors.

One mission will be to track down and forensically examine the best Cornish pasty in the world and we’ll introduce our readers to the wonders of the Stargazy pie too.

Watch this space. There’ll be reports on them all and maybe think about signing up for a Bohemian Mojo UK adventure yourself. It’s magic!