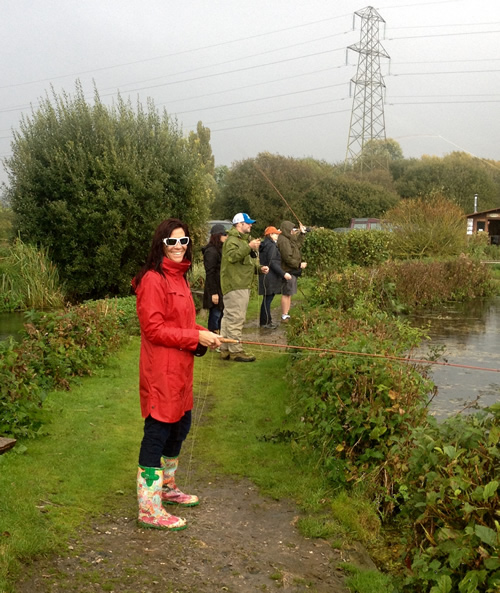 Poor Ben... nobody warned him about MojoMeantime. Of course, we didn't know about it either...yet. But thankfully, it didn't stop us from having a Bang Up day leaning how to fly fish with Ben Bangham.  The story of the MoJo crew’s autumn visit to the UK is a tale of the unexpected. The trip took on some wonderful twists and turns as the ‘sisters’ breathed their own brand of the off-beat and the downright eccentric into the trip.

Perhaps the greatest revelation was a quantum one as time and space took on a completely new dimension. It was a concept the MoJo mamas seemed completely at ease with but one that left me briefly dazed and disoriented.

It began on a miserably wet Wednesday morning in October. The rain was coming down in wind-blown sheets but all was still on for a pre-arranged day of fishing.

MoJo were going to learn the arts and skills of fly fishing for trout at a lake close to one of the iconic chalk streams of Wiltshire. They were due to meet the magnificently named instructor Ben Bangham at 9. 30am at Woodborough on the River Avon.

There’d be a walk along the river where the ecology of a trout stream and the wiley ways of the brown trout would be explained. Then casting practice followed by a chance to catch a trout from the beautiful lake.

They were about to leave the cottage at Cirencester thirty miles away. Oh! They’d only be an hour late then.

A quick call to Ben. That’ll be fine said the laid back instructor.

Ten thirty came. And went. We were still in a NoMoJoShow situation.

Another call. Yup, definitely, possibly left the cottage now. Faith in that promise was not high.

Another hour passed. No show MoJo and Bangham wore the patient smile of a seasoned fisherman while probably wanting to bang his head on the wall of the fishing hut. No problems, he said, we’ve got all day which was already factually incorrect and two hours behind the passage of the sun.

In the end it was a MiddayMoJo arrival and the fishing experience began with Ben showing heroic courtesy while the sisters muttered stuff about broken hair driers and weather.

And so MoJo Mean Time was conceived and thereafter factored into the schedule.

What about the fishing you may ask? Well Ben weaved his magic showing how the delicate balance of a chalk stream supports the elusive trout. Right on cue a kingfisher flashed past in a fly-by.

Then the MoJo team spent a couple of hours of fun and fascination as they tried to master the skills of casting a line and catching a trout. Oh! And it didn’t stop reigning all day.

MoJo Mean Time - Two and a half hours behind GMT