In this third installment of Bohemianmojo’s quest to find the real King Arthur we’ll look at the gritty truth of warfare in the Dark Ages and how Arthur and his warriors might really have looked. There’s a bit of archaeology too which goes some way to supporting the argument that Arthur was indeed a real leader. So, how did Arthur’s lot really look? Piecing together what accounts we have of the time, together with the history and style of later Welsh and Scots armies, we can safely say that Arthur led a war band of light, highly mobile mounted warriors.  They would have ridden ancient native pony breeds like the Dartmoor, the Exmoor, the Welsh Mountain

and the Welsh Cob too. They probably did most of their fighting on foot when they arrived swiftly on horseback to confront their enemies.

They would have been weather beaten and battle hardened and, given the British climate, probably covered in mud and soaking wet after a mounted march.

For weapons they would have used light spears and bows then the usual catalogue of butchering tools used in this uncompromising warfare; swords, axes, spikes and daggers among them. Swords were prized weapons and the best of them would have been the property of the knightly class. Fierce warriors then, they would have been prepared to die, not for God and King, but for culture and tribe; and most of all for the land they loved.

Legend has it that Arthur rode under a Dragon banner, the forerunner of today’s stirring Red Dragon of Wales

. I don’t think it too fanciful to imagine either that Arthur and other high status warriors, the knights if you like, may have had some prize pieces of Roman armour and helmets, which were still serviceable, to give them that extra élan on the battlefield. The Bards also recited many lines praising the gold adornments of these high status warriors in their battle list poems.

Traditionally in the Iron Age Celtic women fought fiercely alongside their men and were often war leaders themselves but by the Dark Ages Roman and Christian tradition had largely wiped out this indigenous feminism and dictated that women should not join in battles. We believe the use of war chariots had also become redundant by the time of Arthur although the Celts had used them to great effect against the Romans.

Many of the battles listed by bards and monks were fought at river crossings, usually fords and occasionally bridges, because then as now rivers marked the lines of frontiers and borders between nations. But unlike the later pitched battles of the Medieval period, most Dark Age battles would realistically recorded as skirmishes or raids involving not more than fifty or a hundred combatants at the most. The chroniclers make much of the large size of the armies Arthur gathered together and we can assume this is another factor that marked him out as extraordinary individual.

We can also be fairly certain that armies on all sides were very maneuverable and able to travel great distances to give aid and support to allies. The notion that the people of those days lived in one village and hardly knew what was going on over the next hill is a fallacy. We know this was a mobile culture and with Saxon fighting Saxon (when they weren’t fighting the Celts) the whole island was a very frightening place to be for most of the Dark Ages.

Let’s turn now to the archaeology of the time, which actually confirms the British mainland was a hellish place to be at the time. It was anarchy. There’s evidence that some of the old Iron Age hill forts, which had been overrun by the Romans, were repaired and re-fortified. Many of the Roman forts along Hadrian’s Wall on the Scots border were re-established too. There are also many gruesome finds of battle sites with warrior burials from the time and many of these are actually Saxon on Saxon engagements as the invading tribes battled it out for the best farmland. 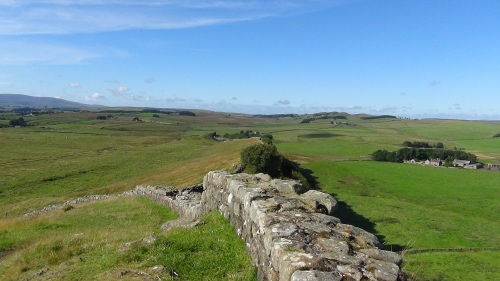 One find at romantic Tintagel Castle on the rugged Atlantic coast of Cornwall set the media alight with interest when a stone engraved with the word Artognou was found in 1988 on a level which was definitely 6th Century. Tintagel is, of course, inextricably linked to the Arthurian legend and the media were desperate for some expert to say, ‘yes, that means Arthur.’ It translates as ‘Bear Knowing’ and as Arthur is derived from the Brythonic Welsh for bear the speculations continues to this day. Not conclusive but it does hold out the hope that some day some lucky archaeologist or metal detectorist will find an artifact directly linked to Arthur.

Amongst those of us who accept that Arthur was an historical figure there’s a debate about the nature of his position in Celtic society. Some argue Arthur had been appointed to a special rank in a clan society, which was on a war footing. They say he was a Dux Bellorum, a Leader in War, rather than a King. I suppose you could compare him to General Eisenhower, Supreme Commander of Allied Forces for D Day and the campaign to retake Europe from the Nazis. The top soldier not the President or the Prime Minister.

Bohemianmojo agrees with this analysis and we see Arthur as a tough, strategically savvy war leader who’d probably learnt his trade under the Romans before they left the British Isles. He’d have worn some armour, probably quite fancy and sourced from kit left behind by the Romans; not too heavy though as he rode at the head of a mobile quick reaction force.  He was such good a war leader that he inspired confidence and gathered large, native armies, the like of which had not been seen since the Roman invasion. And Arthur was so charismatic his name has lived on for 1500 year and still inspires to this day. More than that his legacy can be seen in the modern map of mainland UK; apportioned into the dominant English homeland but still showing Scotland and Wales as separate nations. Without his crucial resistance to the Saxon invasion Wales and Cornwall would have been wiped-out as entities and Scotland would be half its present size.

Next time, in the fourth and final installment of this Arthurian odyssey, we’ll look at some of the Druidic motifs behind the legend, which were translated into some of Christianity’s most powerful icons by the Arthurian legend. At the same time we’ll try to answer the paradox of the wizard Merlin in the medieval version of Arthur’s story. And finally we’ll guide you through the stars in the sky at night, where we think the extraordinary truth of King Arthur’s nature and title really lies.