TALES OF WITCHERY AND KING KILLERS!

On first sight it could have been a graveyard in any number of peaceful English villages. Tall trees stood sentinel, planted to give summer shade for the neat rows of heads-stones on carefully mown lawns. Not England though but New England and the epitaphs on those tombstones in the small town of Hadley, Massachusetts, held the secrets of high drama played out on both sides of the Atlantic nearly three hundred years ago. 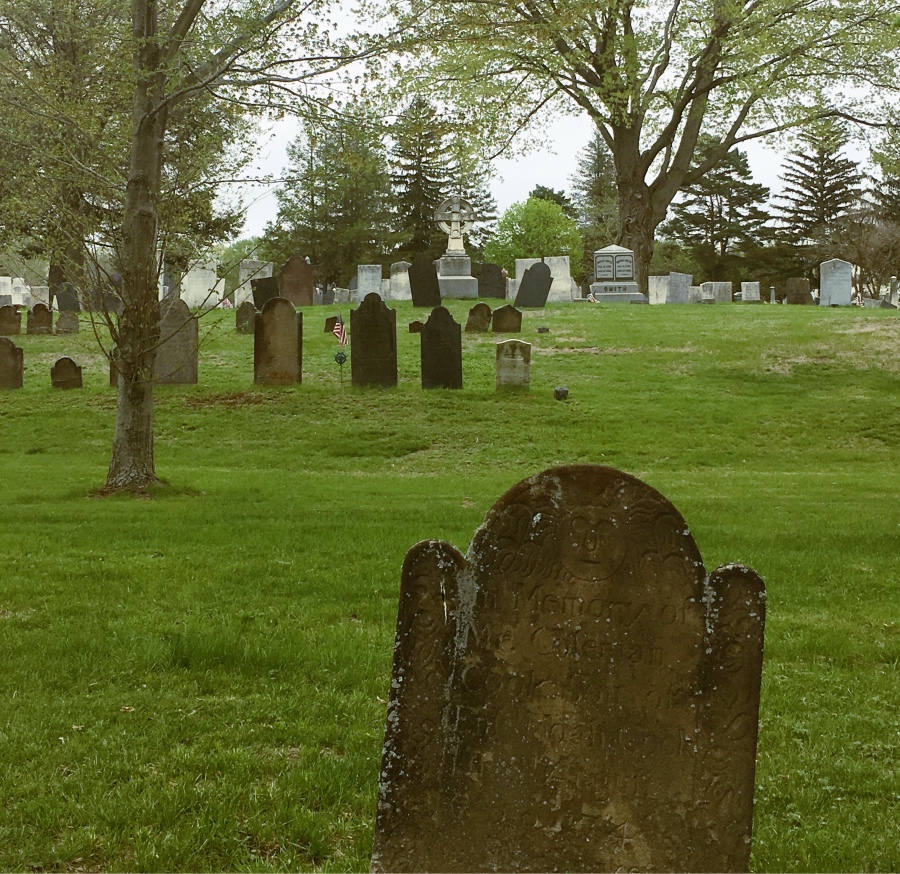 , setting family against family, and America was undergoing its traumatic birth pains on the East coast. Stephanie and I headed for Hadley

after an intriguing conversation with a friend. We drove across the beautiful hills of the Westfield River to the banks of the mighty Connecticut River. We’d travelled to Hadley in search of the grave of a woman called Mary Webster.

Mary had been one of the original, pioneering, founding population of the township and lived in Hadley when it was a lonely cluster of cabins, within a stockade, clinging precariously to the fertile river wash soil from the Connecticut. We know from the records she was certainly possessed of a waspish tongue and used it to abuse her neighbours. In those days Mary would have been described as a crone or a hag. Who knows, she may even have had a wart on her nose and it was only a matter of time before Mary was accused of witchcraft and in 1683, after a year in jail, she was put on trial in Boston.

The neighbours who’d cruelly ganged up against her claimed she bore the marks of the devil on her body and that her ‘familiar’ was a fisher cat; a huge member of the weasel family found frequenting the riverbanks of North America. They also said she had cast a spell on a local militia captain to cause his prolonged illness and death. Witchcraft accusations were quite common in the colonies at the time but the hysteria that ended in the tragedy of the Salem hangings had not yet gripped the authorities. Common sense prevailed and, like many others, Mary was acquitted.

With nowhere else to go Mary returned to Hadley where the witch frenzy against her was still in full flight. A lynch mob of young men, probably drunk, dragged Mary out of her home and hung her from tree outside. The next morning they returned to cut her down but remarkably Mary was still alive. They threw her into a snowdrift and she survived that too. They mob must have realised they’d gone too far in trying to kill an acquitted woman and she was left in peace for the remaining fourteen years of her life and has gone down in history with the chilling title of Half Hung Mary. 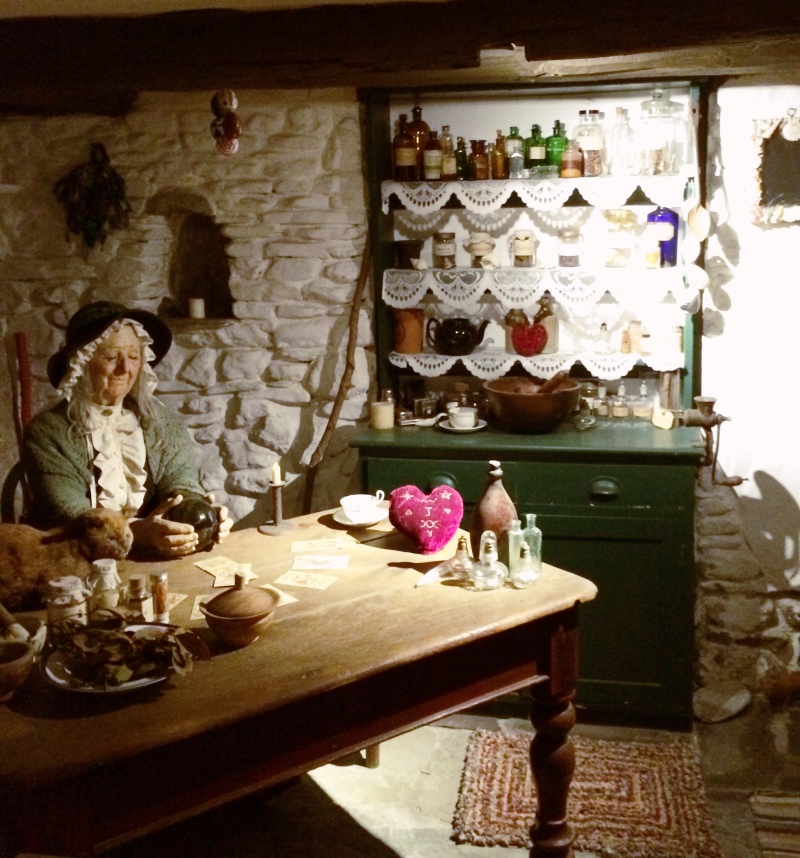 in the Cornish fishing village of Boscastle and we decided to travel to Salem to visit the museum there too. I wish I could give you a critique of the Salem museum but it was closed when we visited. The town itself is interesting and some of the old architecture is wonderful. Unfortunately the centre has a bit of a theme park feel about it. Obviously a lot of the shops are witchcraft themed and they vary considerably from tacky souvenir outlets to some interesting stores with really good stuff on the shelves.

However the overall feel for me is that Salem lacks one essential ingredient and that’s a sense of history. In contrast the evocative graveyard in Hadley is draped with a sense of history. One can almost feel the strange collisions of fate that took place there in the 17th Century. To be fair to Salem it was outside their ‘season’ and I think we’ll have to return when the Museum is open and maybe take a guided tour too before passing final judgement on the town.

We couldn’t say the same for the Museum of Witchcraft in Boscastle, Cornwall. Stephanie and I found that to be a strange and disconnected place. It’s full of artefacts that could have been thrown together by pre-school kids but essentially it appears to be a shrine to some modern witches particularly Gerald Gardner, the upper class self publicist, dubbed the ‘father of modern witchcraft.’ When you analyse it the whole feel of the museum is actually calibrated in a Christian context.

But what really made us both quite indignant was a list of names of people who’d been executed for witchcraft in England. It was on the right hand side of a square cabinet at set at right angles to the visitor so you have to contort yourself to read it at all. What a shame that such a place can put the personality cult of a neo pagan egotist like Gardner above the victims of persecution and relegate them to the side-lines of the history of witchcraft. We won’t be going there again and I’d give it a very poor rating on Spelladvisor.

Back among the spectres of Hadley cemetery we couldn’t find Half Hung Mary’s burial plot but we did find the headstone of Peter Tilton; one of the founding fathers of the settlement. Stephanie called me over to read his curious epitaph, which declared Tilton had ‘concealed the regicides.’ Well I knew a regicide is someone who has killed a king but which king? It took a moment to realise it could only be King Charles I of who was beheaded by the Puritans at the end of the bloody English Civil War. And what a little research revealed was indeed an incredible story of high politics in those early days of American colonial history focussed on this unlikely location.

We have to go back to imagine the conditions in a new township like Hadley and those of its citizens. Those settlements were the satellites of European conquest of the Native lands. Hadley was walled but vulnerable. Most of the Natives who lived on the periphery of the town were downtrodden by European infections and alcohol. But beyond the townships were proud tribes willing to deal with the newcomers but only on a level.

Into this mix blend the strict Protestantism of the Puritan settlers, many of whom had fled the religious intolerances of the English Crown. This made them the natural allies and friends of the Puritans in the Parliamentary Army, under Oliver Cromwell, fighting the Royalists back ‘home ‘ in England. Those New England colonists were a people believed absolutely that the lord would provide. They also had a hostile relationship with the devil and saw his malevolent handiwork all around them; hence the morbid fascination with all things witchy.

When the monarchy was restored in England, after the death of Cromwell, and Charles II

returned to his father’s throne he was hell bent on retribution against the fifty-nine ‘regicides’ – those who had signed his father’s death warrant. Oliver Cromwell and twenty-three others already dead were disinterred and hung from the gallows. Twelve still living were hung drawn and quartered while others fled to Holland and Switzerland where the King’s agents assassinated a few of them. 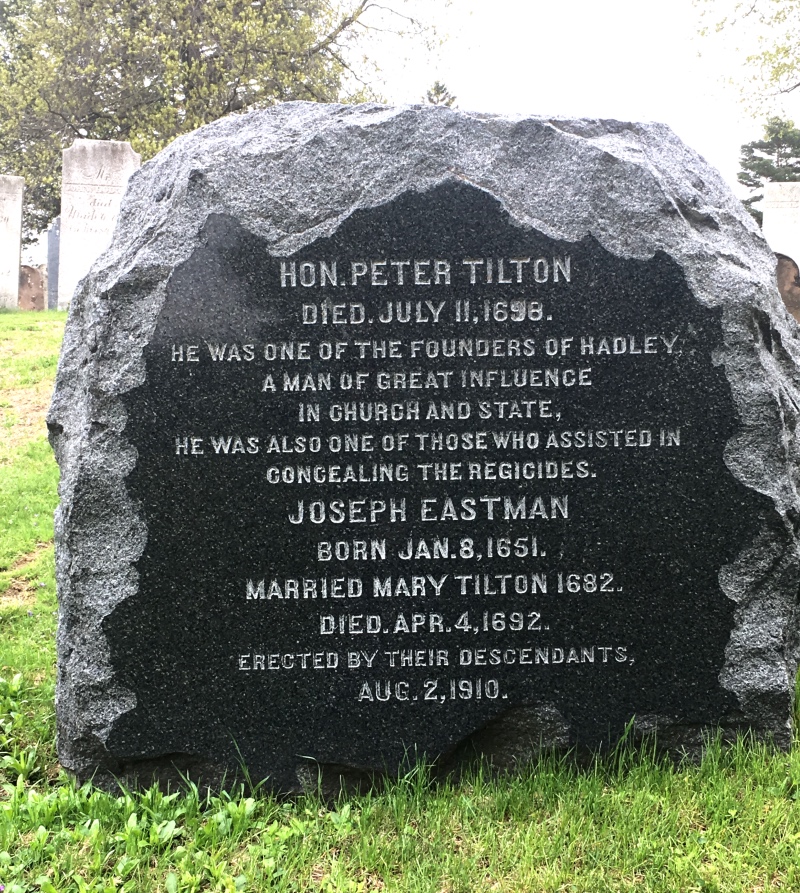 But three more fugitives decided to put the vast Atlantic Ocean between themselves and the King’s revenge and they sailed to the American colonies where the largely Puritan settlers gave them shelter in Boston and New Haven. One of them, John Dixwell, was fortunate enough to be thought already dead by the authorities in England. But the new King was desperate to get his hands on William Goffe and Edward Whalley. They’d been generals in the Parliamentary Army and Whalley in particular had a stellar military career leading their forces to victory in three crucial battles. He was also married to Cromwell’s sister, had been fourth to sign the death warrant and had guarded the King before his beheading.

Although wanted men the Goffe and Whalley lived openly for a while until the King’s writ arrived from the West Indies. The Colonial authorities grudgingly put together a tribunal to extradite them but, significantly, did not hold them in custody. They fled to New Haven where they hid for some months in Judge’s Cave. From there they were guided up the Connecticut River to Hadley where they might have lived away their days quietly had not fate intervened yet again.

In 1675 the Wampanoag tribe rose up in what is recognised as a major catastrophe for the New England colonists. Many died and others were taken captive and handed over to the French as bands of Natives up to 1500 strong ravaged dozens of towns including Springfield, Swansea and Marlborough. They’d been treated badly at the hands of Europeans and decided peaceful coexistence was no longer an option.

The tribes, led by the chieftain Metacon, attacked Hadley too and killed some fifteen settlers. It’s then that the elderly General Goffe came out of hiding to organise the population on military lines and repulse a second attack. Since then he’s been known as the ‘Angel of Hadley.’

How could we have known that a simple visit to a cemetery could have unlocked such a romantic story in the true sense of the word. We find it so remarkable to think that two men who’d played such a pivotal part in the history of England were living furtively in Hadley during the witch dramas of Half Hung Mary. Truly Hadley has been a crucible of history.