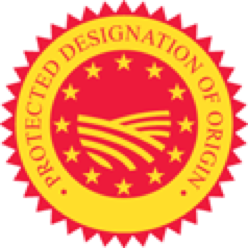 It’s worth explaining the system for those not familiar with it. In the European Union there are three labels of geographic indication, introduced in 1992, and each has a different seal printed on packaging.

The first is the red and yellow seal of the Protected Designation of Origin ensuring the food inside is made in a defined region and according to recognized traditional processes. This is a relatively uncommon label and only awarded to food-makers who have to pass stringent rules.

The more common Protected Geographical Indication seal is blue and yellow and guarantees that at least one of the steps in a food making process takes place in a specific region.

The seal for Traditional Specialty Guaranteed (also blue and yellow) is not strictly geographical but requires the use of traditional ingredients or manufacture. 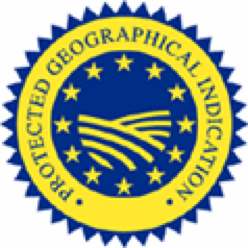 These rules and seals cover everything from champagne to Scotch whisky, German bratwurst to Melton Mowbray pork pies in the UK. They protect many types of cheese from English Stilton to Italian Parmigeano Reggiano.

There are some 1065 foods with GI seals registered in the EU, around 1561 wines and 325 different types of spirits. The vast majority are European specialties but countries outside the EU are also allowed to register their food and drink treasures.

But all this is in danger of being watered down if not swept aside by the Ttip free trade deal being negotiated between EU and the USA. As always when discussing Ttip the Food Fight column issues the standard ‘health’ warning about the negotiations. They are held in secret, the public is deemed suitable to know about any of the negotiations and they are not democratic.

The problem is simple. It’s cultural. Heritage food-making is part of the very fibre of European lifestyle. Even the UK has its fair share of regional specialties but on Continental Europe these heritage foods are held to be almost sacred.

Things are different in the United States where few foods have the regional specialty recognized and where they are they are protected by trademark law not food regulation. Examples are Florida oranges, Idaho potatoes and Washington State apples

However there are many foodstuffs produced in the USA with familiar European names. But they were transplanted into the States by the vast inflow of immigrants who brought their food traditions with them.

So you might, for example, find Parmesan cheese produced in a traditional way by Italian immigrants right across the US. It might be just as good as anything you might find in Italy, or it might not, but as far as the EU is concerned it doesn’t match their geographical rules. 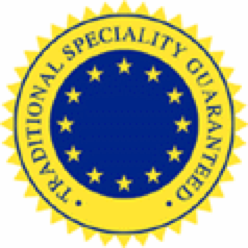 And that’s a problem for the Ttip negotiators. Round pegs and square holes are not welcome in a treaty designed for convergence of trade. The EU is reported to be digging their heels in on this but is it really?

We might have a better idea if the future of our food imports wasn’t so cloak and dagger. In Germany, where the issue is causing quite a furore, the agriculture minister is reported to have commented, “To seize the opportunity of free trade with the giant American market, we can no longer protect every sausage and every cheese as being a specialty.”

Thirty per cent of all EU exports to the US are these GI specialty products although they are a relatively narrow band of niche products like Scotch whisky from Britain, champagne and cognac from France and Parmigiano Reggiano from Italy.

The US would ideally like all Geographical Indicators swept aside to give American products a ‘level playing field’ in the market. But Food Fight believes in choice and choice means labels.

Just as the labeling of ingredients in a food product helps a shopper to make a healthy purchase so GI seals on food can help them make a taste choice. Price will play a part and that’s really what its about.

Without GI’s there is no benchmark of excellence and less lovingly crafted foods made an ocean away will be able to charge inflated prices – all because they carry a name that is no longer protected.

Frankly Bohemian Mojo’s FoodFight doesn’t trust the EU not to roll over and it certainly doesn’t trust US regulators who recently denied American consumers the right to even know if their beef has been grass fed. We say let the labels stand and let the consumer decide. That’s a fair market.