Tweet
Forget the EMMY’s forget the BAFTA’s the whole of Britain is bubbling with anticipation for the award for the best fish and chip shop in the country.
Fish and chips are a famously British meal and, before foreign trawlers were allowed to fish out our waters, they were widely available as a cheap and wholesome meal favoured by the so called ‘working class; whoever they’re supposed to be. They are indeed a great meal and so popular that they’ve even been exported to holiday destinations favoured by Brits. It’s relatively simple to get some on Spain’s Costa Brava for instance.

However a packet of fish and chips is no longer Britain’s favourite food as they’ve been usurped by curry as our national dish. The takeaway curry trade is now worth £3bn, which is more than twice what’s spent on fish and chips.

According to the Fish Fryers Association of Great Britain, there are 10,500 specialist fish and chip shops in the UK whereas there are only 1,200 McDonalds outlets and 840 KFC’s. UK consumers eat some 382 million meals from fish and chip shops every year, which equals six servings for every man, woman and child in the country.

The world record for the fastest serving of chips, from raw potato, is 222 seconds Henley's Fish & Chip Shop in Wivenhoe, Colchester, Essex. The record number of portions of fish and chips sold, according to the Guinness Book of Records, was by Malini’s, of Glasgow, who sold 8.5 portions a minute for 24 hours. But all that’s eclipsed by curry house with at least 18 tons of chicken tikka masala, sold by 15,00 Indian restaurants and eaten across the country each week 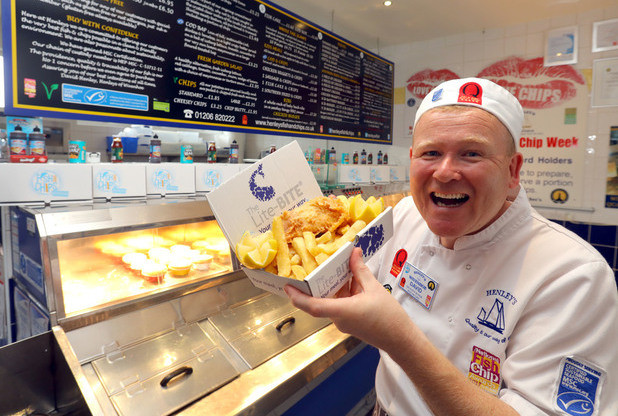 For the record here are the ten finalists for the title Best Fish and Chip Shop in Britain in the National Fish and Chip awards, which have been held for thirty years. We reckon you’ll get a good meal at any of them and, obviously,  if we’re passing we’ll try them and let you know. They are: